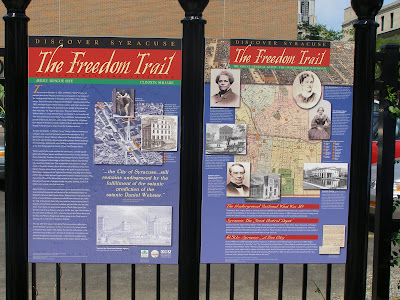 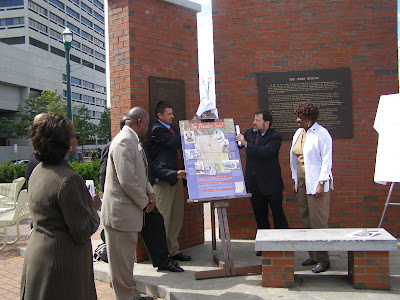 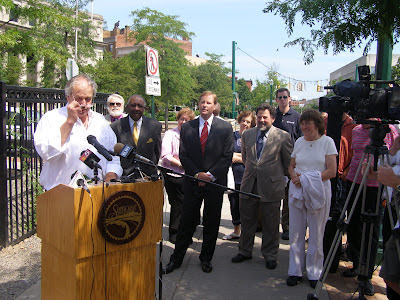 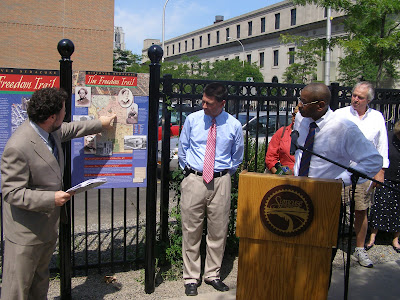 
Read the entire post about all the sites and signs here, and see pictures.
Posted by Samuel Gruber at 2:38 PM No comments: 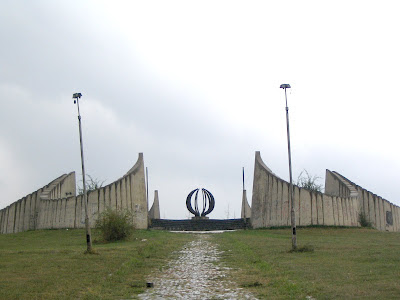 I recently wrote about the bad state of the New Jewish Cemetery in Pristina, Kosovo. This is hardly the only neglected memorial site in the new country.  Not far is the large memorial to Kosovo's partisans who died fighting the Germans in World War II. The once-grand site in now forlorn; vandalized and stripped of the names of the dead it was built to remember. Ivan Ceresnjes has sent photos, and more can be found on-line.

The monument complex erected to remember Kosovo partisans who died in world War II was built at Matičansko Brdo in 1961. Designed by architect S. Lichina, it consists of several curved concrete arms, surround in a central plaza.On the concrete walls were originally set 270 stone medallions with the names of the fallen, including a number of them Jews. The memorial has been vandalized, stripped of all medallions and covered with graffiti.   Once a grand lesson of socialist history and nation building, it is now a erased text, a course in forgetting.  Only its stark forms remind the viewer of something lost, and dimly recalled aspiration. 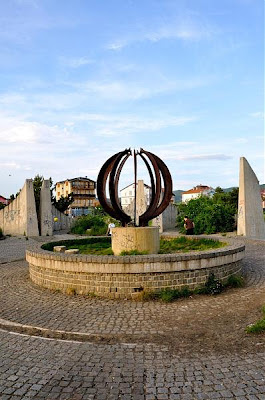 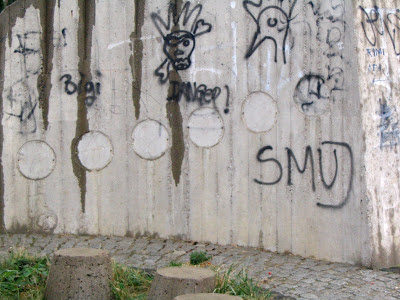 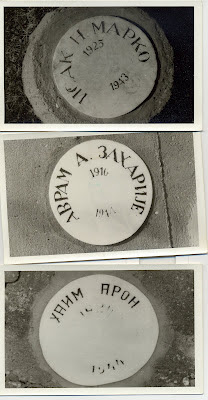 The Pristina monument is just one of thousands of memorials erected throughout (the former) Yugoslavia during Tito's long rule (many can be seen documented on Flickr), especially in the 1960s and 19760s when, after Yugoslavia's break with the Soviet bloc, it strove to forge a unified and dynamic national image.  Of these monuments there are score of large strikingly modern - even futuristic - designs that are architectural in their size and massing, but sculptural in the plasticity of their form.  The best photos are those of Jan Kempenaers (found in his book Spomenik,  Roma Publications).  They commemorate the past dead, those heroes who laid the foundation for Tito's socialist federation; but they were also forward looking, among the most radically different architectural designs off the 1960s and 1970s.  perhaps the best know of these monuments is the one dedicated in 1966 at the concentration/death camp of Jasenovac (Croatia). Today them seem to belong to sci-fi landscape from Star Trek rather post-war Europe. It was a period an enormous architectural and sculptural optimism. 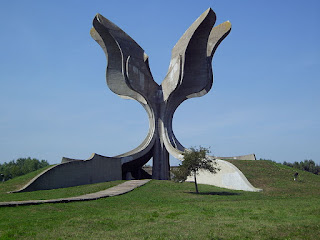 Robert Burghardt offers a selection of these monuments in the The Form und Zweck Zwei fanzine, and writes evocatively of their haunting, often looming modernism


"Those monuments have an abstract, often monumental, but always unusual and peculiar formal vocabulary in common. They are located in the centre of Yugoslavian modernism, because they mark its starting point and they announce the modern outlook. In doing so, they still proclaim a future, which already has become past.  They are expressions of this future and they refuse to stop epitomising its coming. They keep calling: Ahead!  Spectres still inhabit the monuments, but their context, their audience has been lost."

Burghardt goes on to say:

"As War-monuments they are unique: They do not express the fighting and death, but life, resistance and the energy by which they were carried. They are directed forward while they mark the starting point for a new society, whose products they are. In their abstract vocabulary they allow for an appropriation of meaning that bypasses official narrations, especially today, after their context has become invisible. They open the scene for numerous associations; they could be ambassadors from far-away stars, or from a different, unrealised present. The openness which originates in the abstract language of the monuments is a visual manifestation of the emancipation from the Stalinist dominance of socialist realism in the eastern bloc, in which future is represented only in a happy-overreaching form of the present. The monuments invoke a utopian moment, stick to aniconism, and translate the promise of the future into a universal gesture.