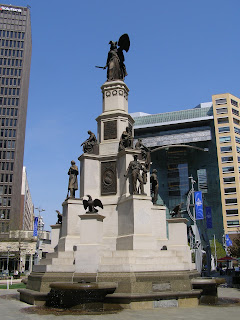 
I was just in Detroit for a few days and spent a lot of time walking around Downtown - an area of grand architecture and monuments - as well as many under-utilized, neglected and derelict buildings.  But some areas,  like the Campus Martius, have been re-developed.  Now the Michigan Soldiers' and Sailors' Monument, designed by sculptor Randolph Rogers and dedicated in 1872, has a modern back-drop, and watches traffic.  I love Civil War monuments.  They so earnestly embody nineteenth century values and aesthetics, and they are also invariably public minded.  They are often commanding, even imperious in their size and strident positioning, but they invariably engage the viewer.  Some, like this monument and ones I've seen in Troy, New York and Providence, Rhode Island, are very busy.  These are the early monuments, they have to be careful to acknowledge all the heroes.  Layer examples get simpler, grander; and often more remote. 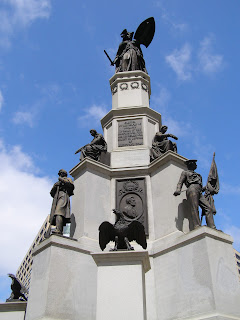 The Detroit monument is built up like a wedding cake, constructed of a series of rising octagonal sections. The lowest  are topped by eagles with raised wings;  the second section  is surmounted by four male figures depicting the navy, infantry, cavalry and artillery of the United States Army.   Above, four female allegorical figure rest on pedestals, and represent the big themes:  Victory, History, Emancipation, and Union.  There are also four reliefs of the Union leaders Lincoln, Grant, Sherman and Farragut.  Randolph's figures are dignified, even brittle, and very stiff.  It will be almost a generation before the Saint-Gauden's introduces robust and energetic forms in American monumental settings.

At the monument's apex is the heroic Michigania, or Victory, brandishing a sword in her right hand and raising a shield in the other.   She is magnificent, though today she might be conducting traffic.
Posted by Samuel Gruber at 6:33 PM No comments: