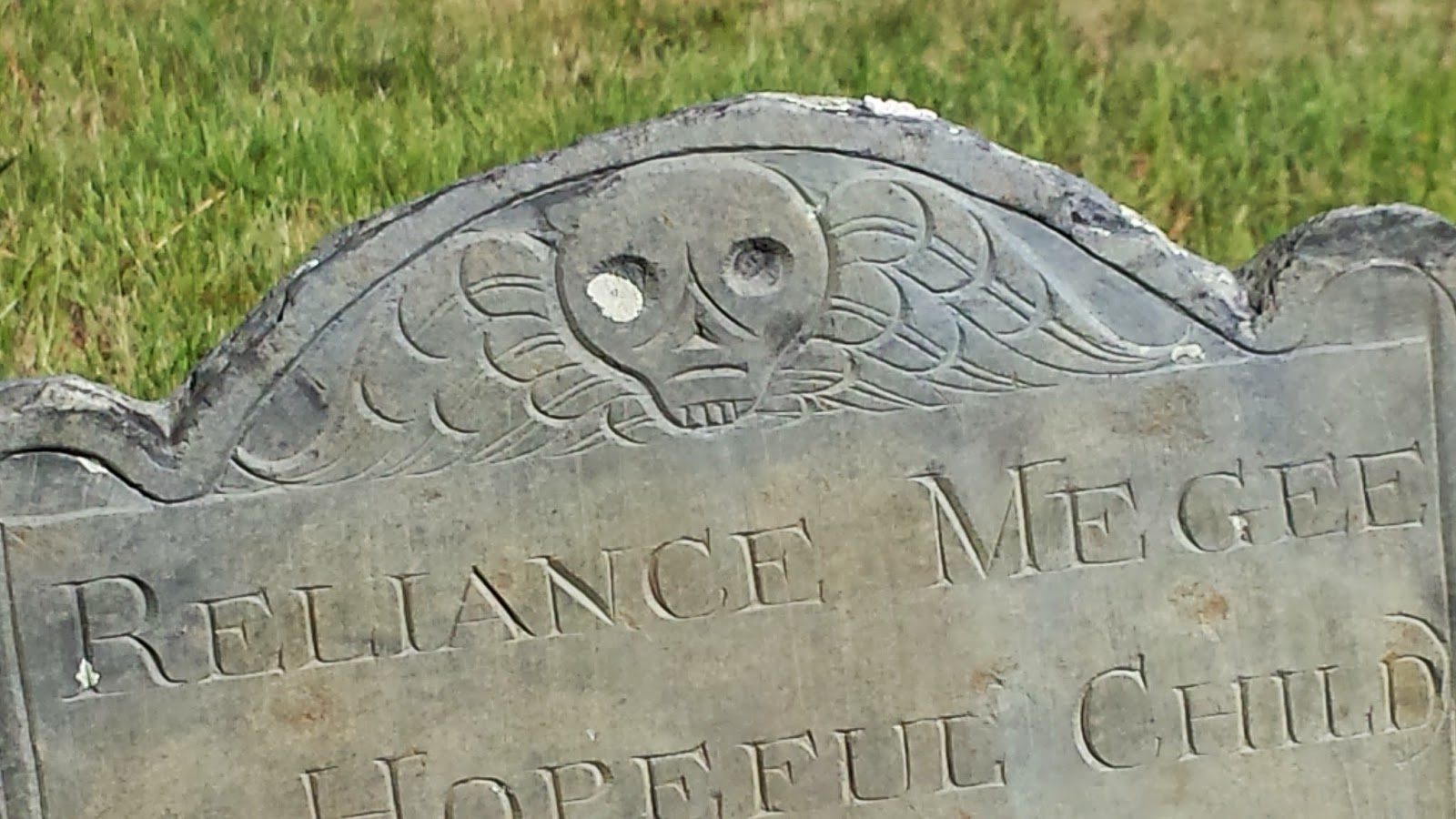 Early this morning I returned to the old cemetery of West Tisbury on Martha's Vineyard that I first visited two year ago.  The dead are buried facing east, awaiting their Resurrection, so the headstones face east, too.  You want to get there early to have the sunlight on the images and verses, and not wait too long as the sun rises, making the incised lines often fainter.

West Tisbury has a good mix of gravestone types, spanning more than two hundred years.  Death's Heads, Angels (or ascending souls), willows, urns, and hands pointing upward are all there, and some later obelisks and other more monumental markers.

Especially poignant are several eighteenth markers for children, such as this one for" Reliance Megee (A Hopeful Child)"who died at age 12 in 1754: 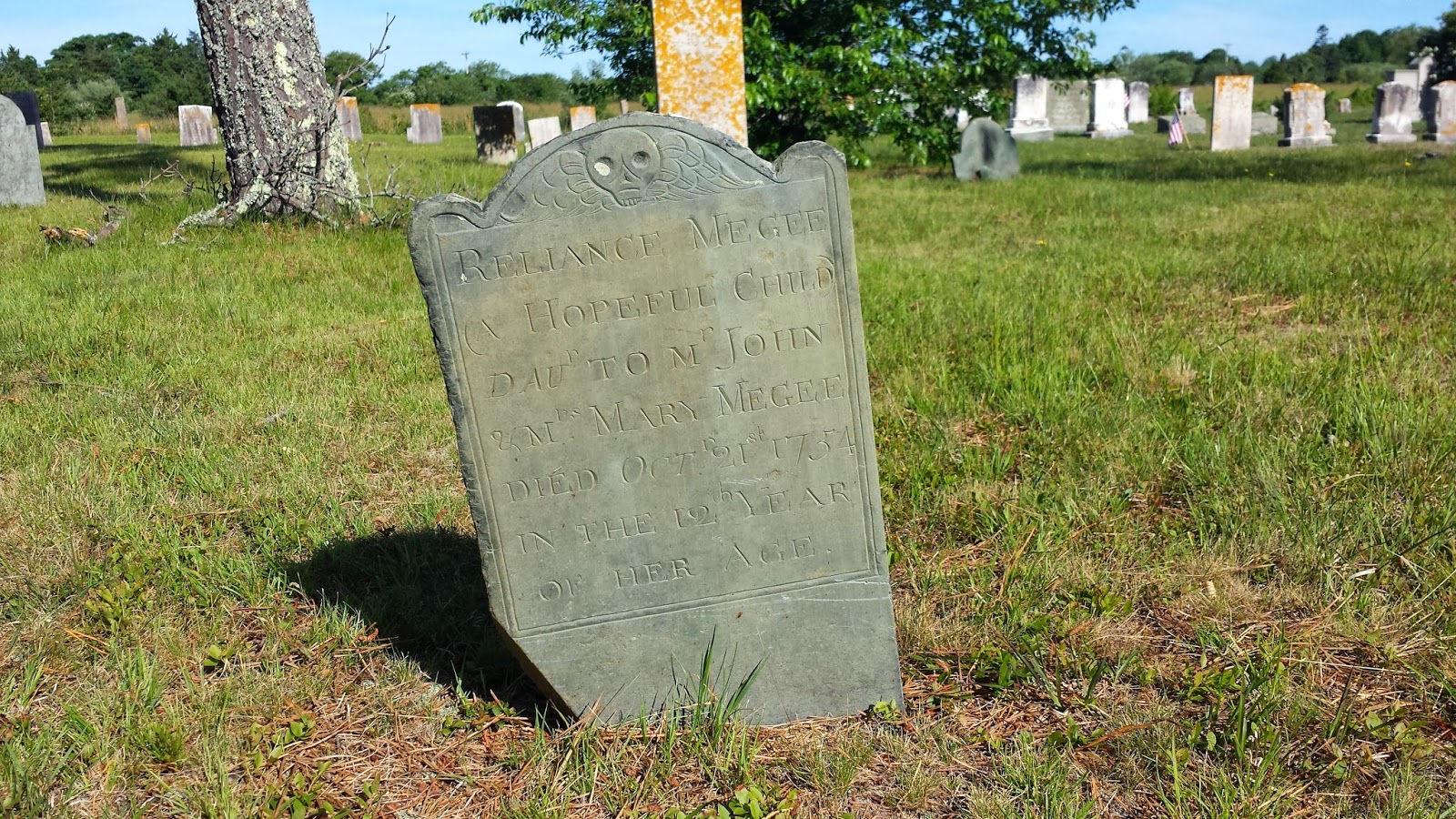 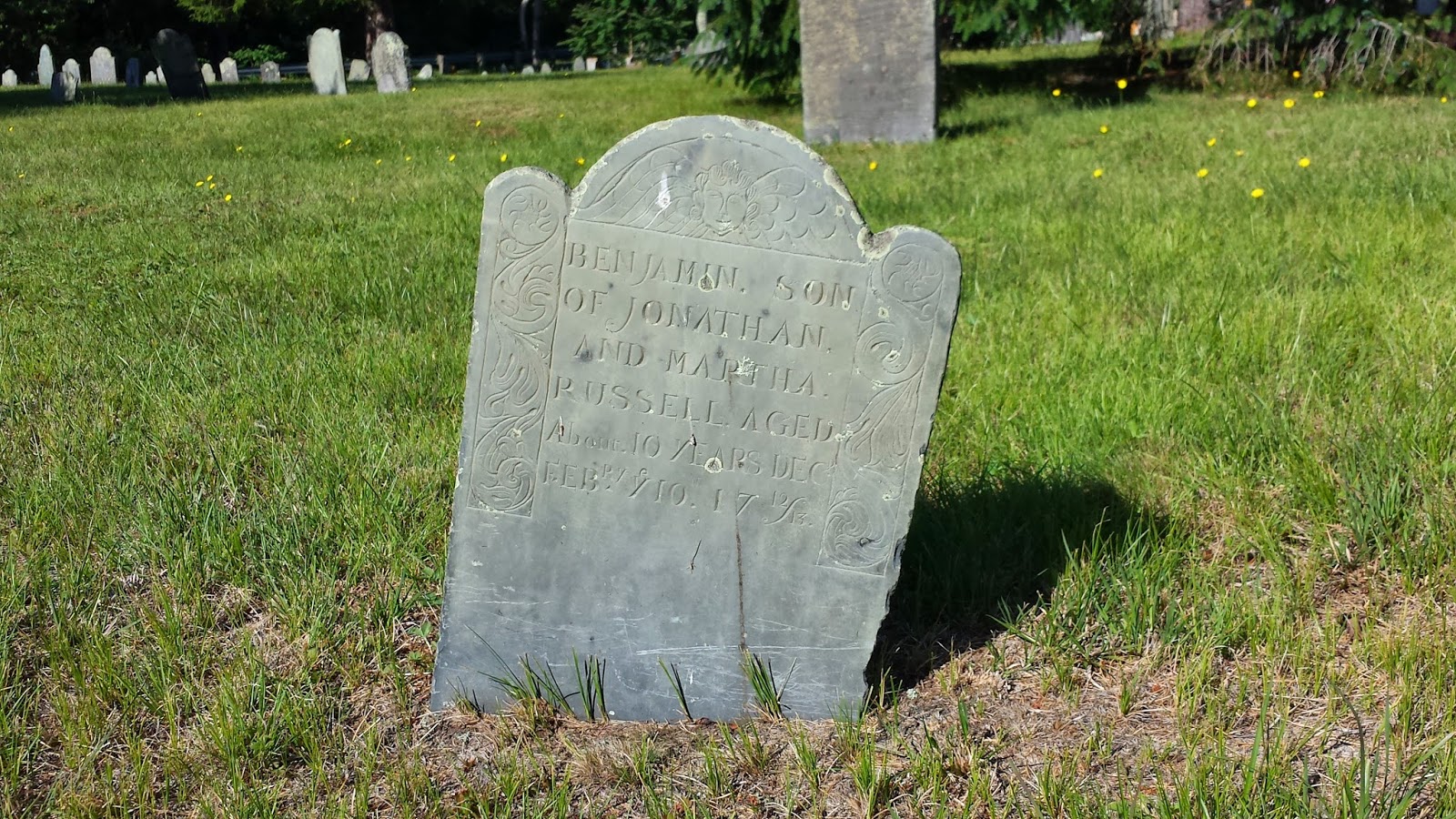 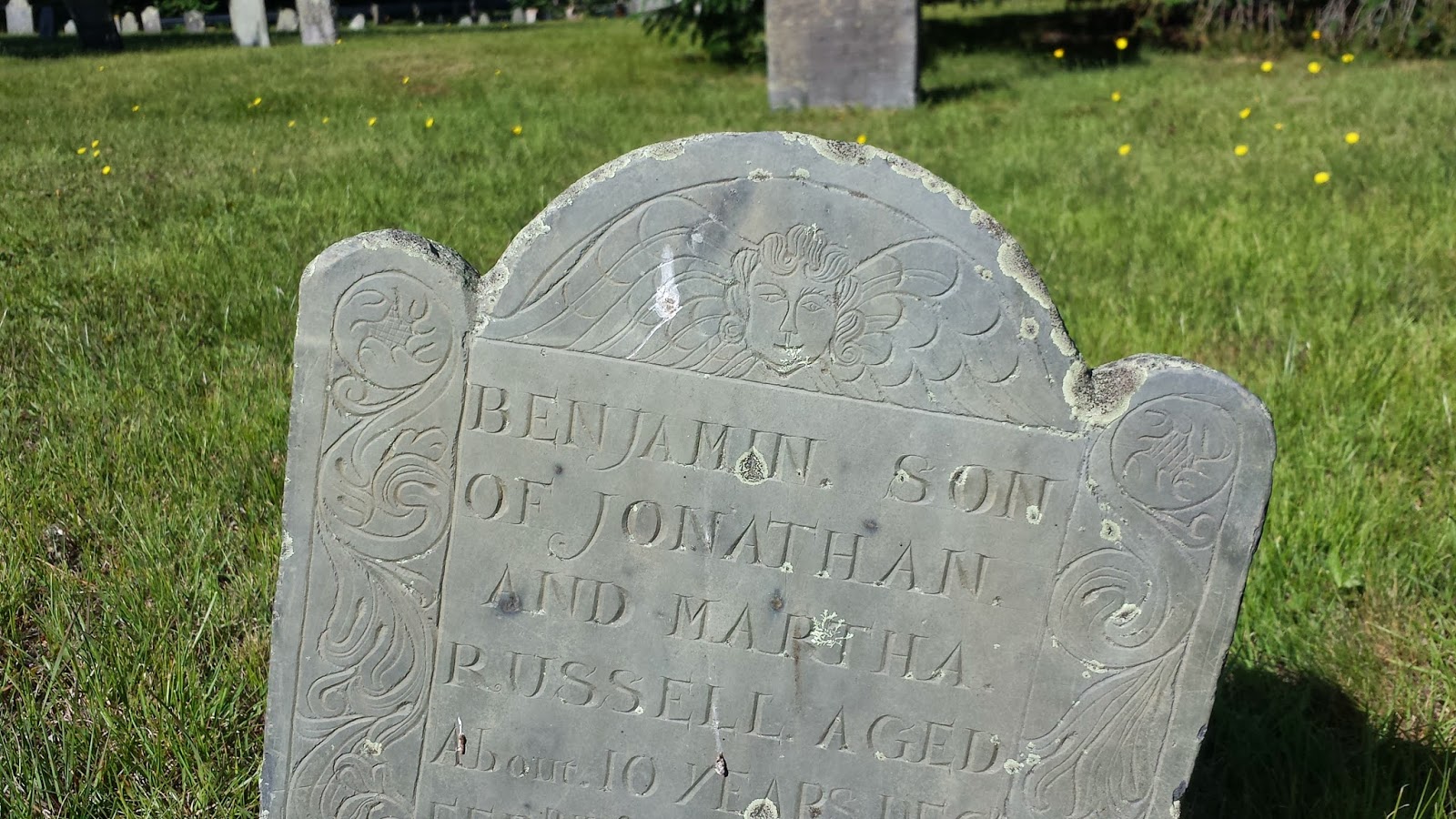 Stephen Luce, son of Stephen and Content, died in 1760 at age 12 and his grave was marked by this stone: 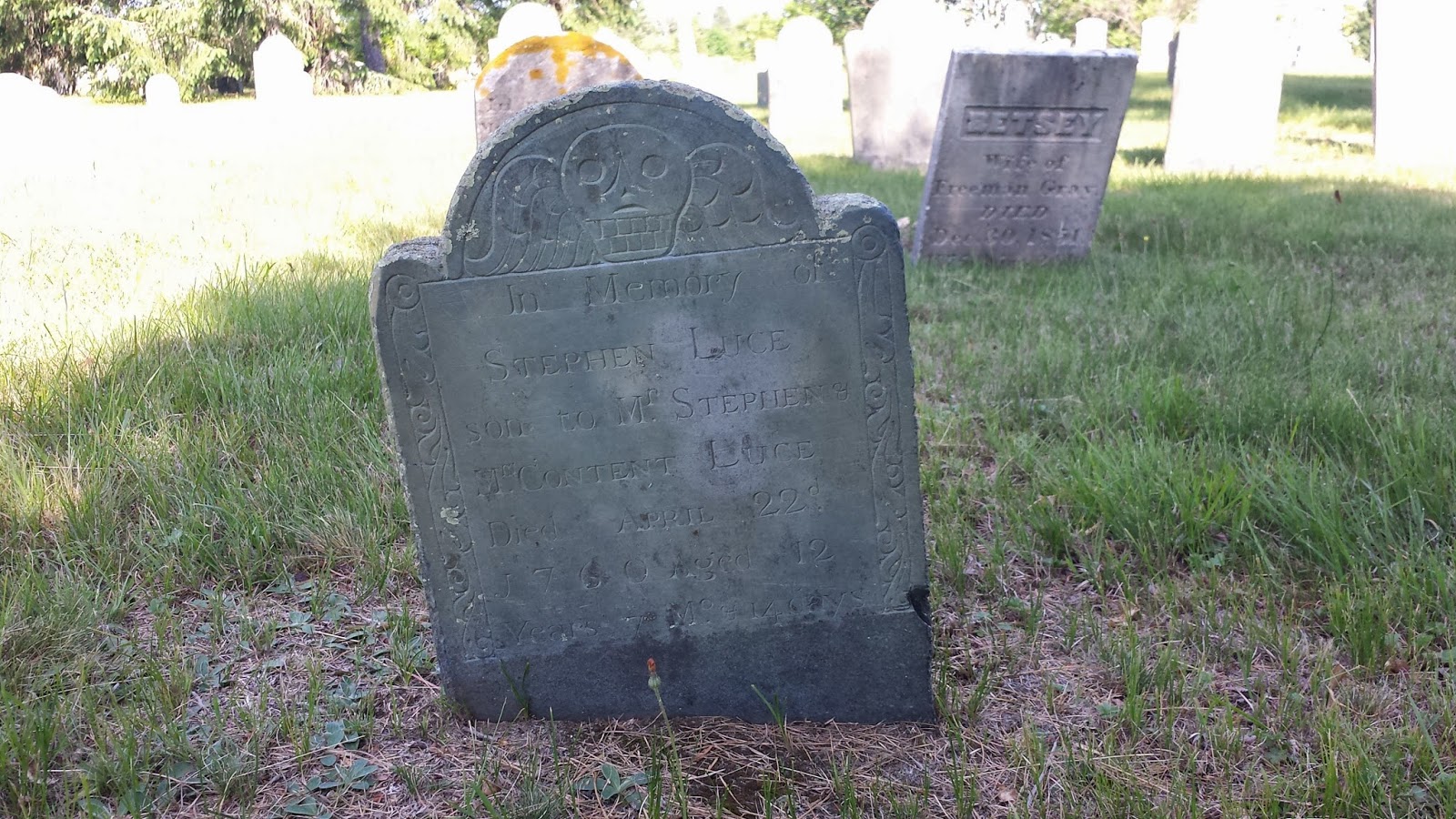 Reliance's and Stephen's graves were each decorated with a Death's Head - the winged skull, but Benjamin's grave was inscribed with a the winged face - either an angel or a representation of his own soul ascending heavenward. Stephen's mother was Content.  Benjamin's was named Martha, but perhaps she was also "Hopeful."

Posted by Samuel Gruber at 10:15 AM No comments: 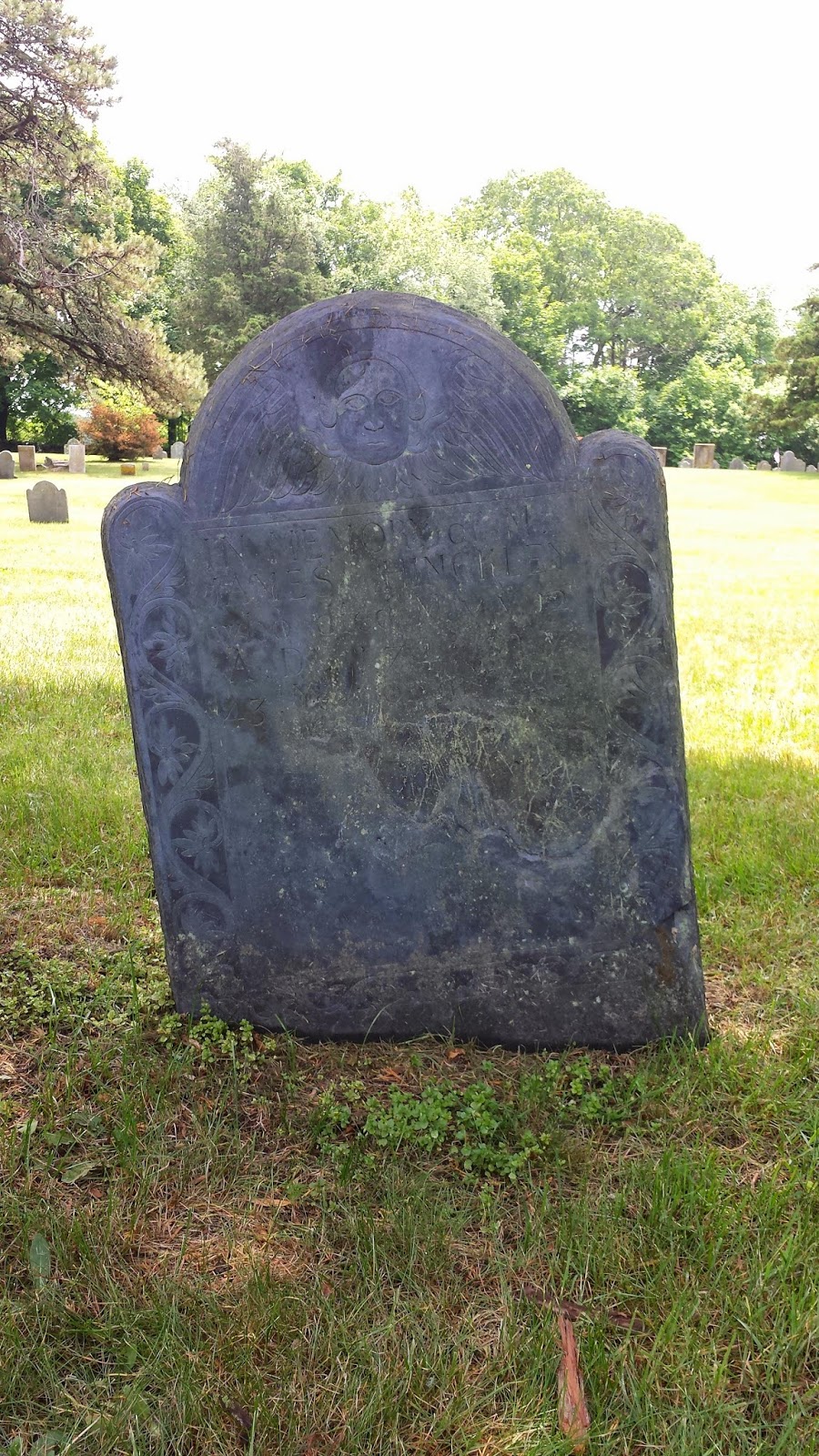 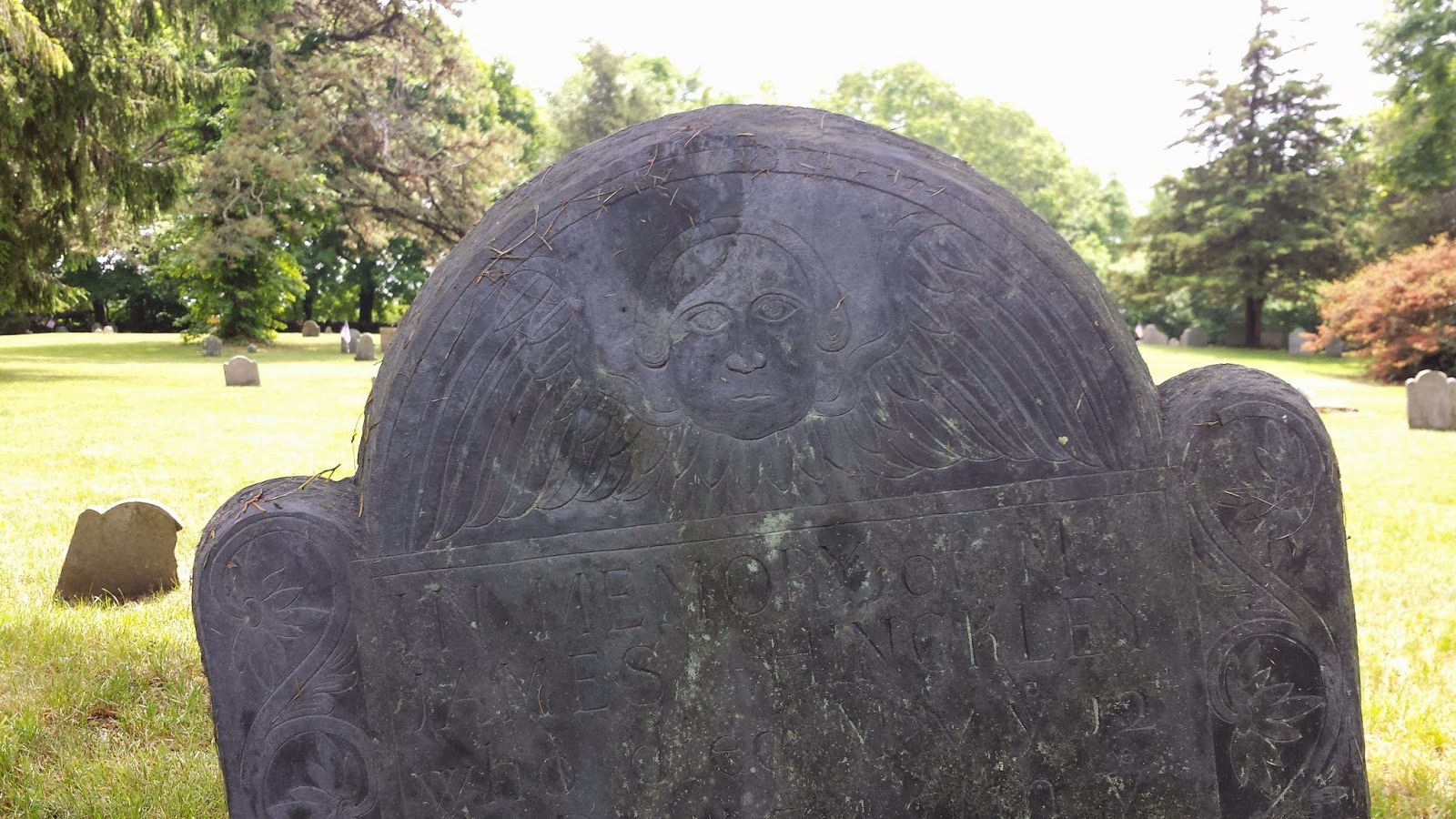 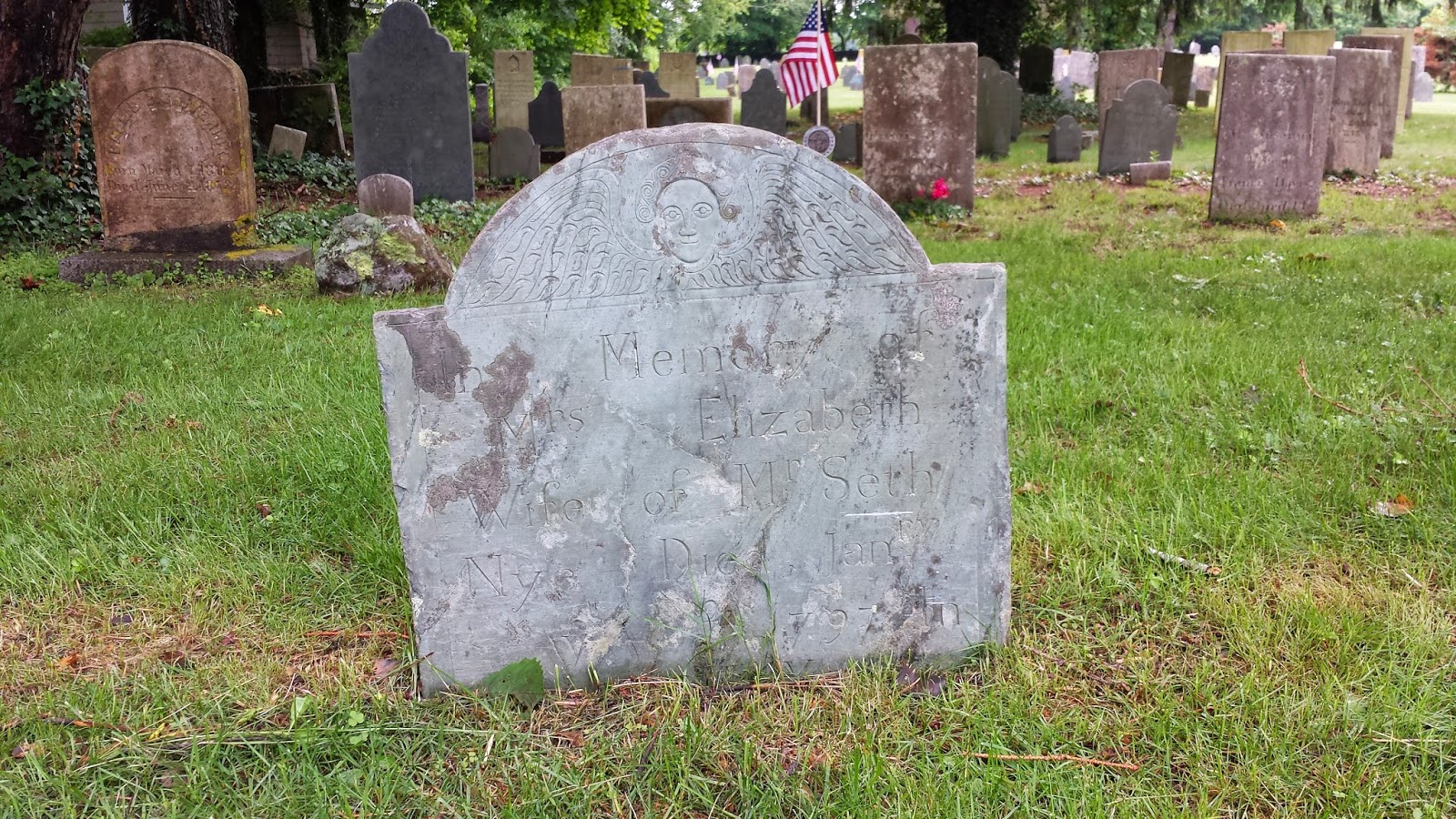 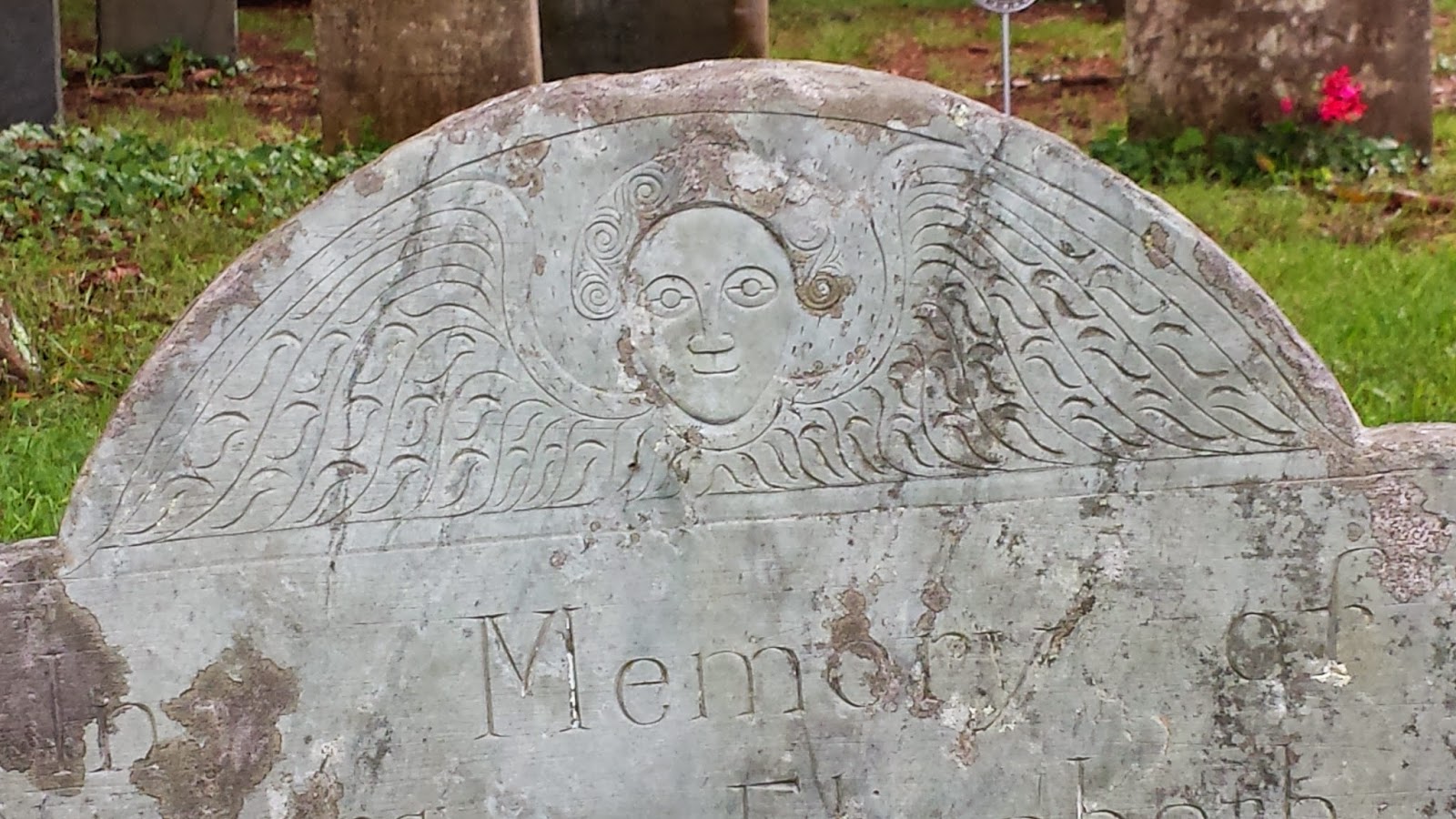 The Puritans and their New England descendants are not often - if ever - celebrated in the annals of public art.  After all, these self-righteous religious were only once-removed from 17th-century European iconoclasm in which all sorts of art and monuments were destroyed.  Yet by the late 17th century, American Puritans demonstrated that they were not immune to the power of the monuments with symbols and sometimes, even images.  These can be seen inscribed and carved on the gravestones in early cemeteries across New England.  I love visiting these places, which remain austere and beautiful, and over the years have taken - unsystematically - many pictures.

The plain shapes of the gravestones, and the plain language of their inscriptions are strikingly modern in their forthright yet laconic forms.  I doubt I can offer anything new to the long and rich study of New England graveyards and their stones, except perhaps to think of them as one of the earliest forms of American public art.  The other day I stopped at the beautiful and peaceful Old Burying Ground in in Falmouth, Massachusetts, which is not even on the local tourist maps, though it was once at the center of the town. 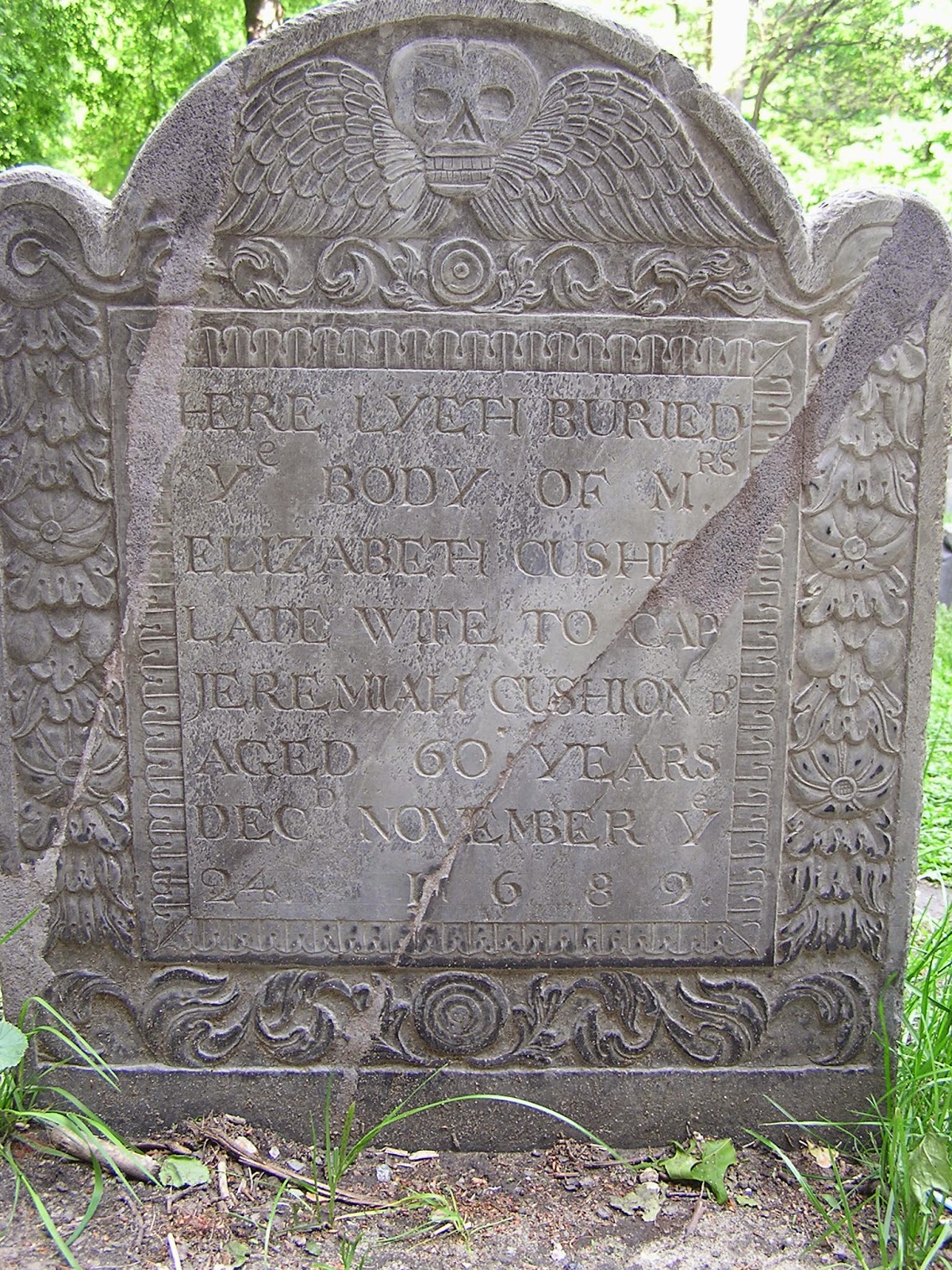 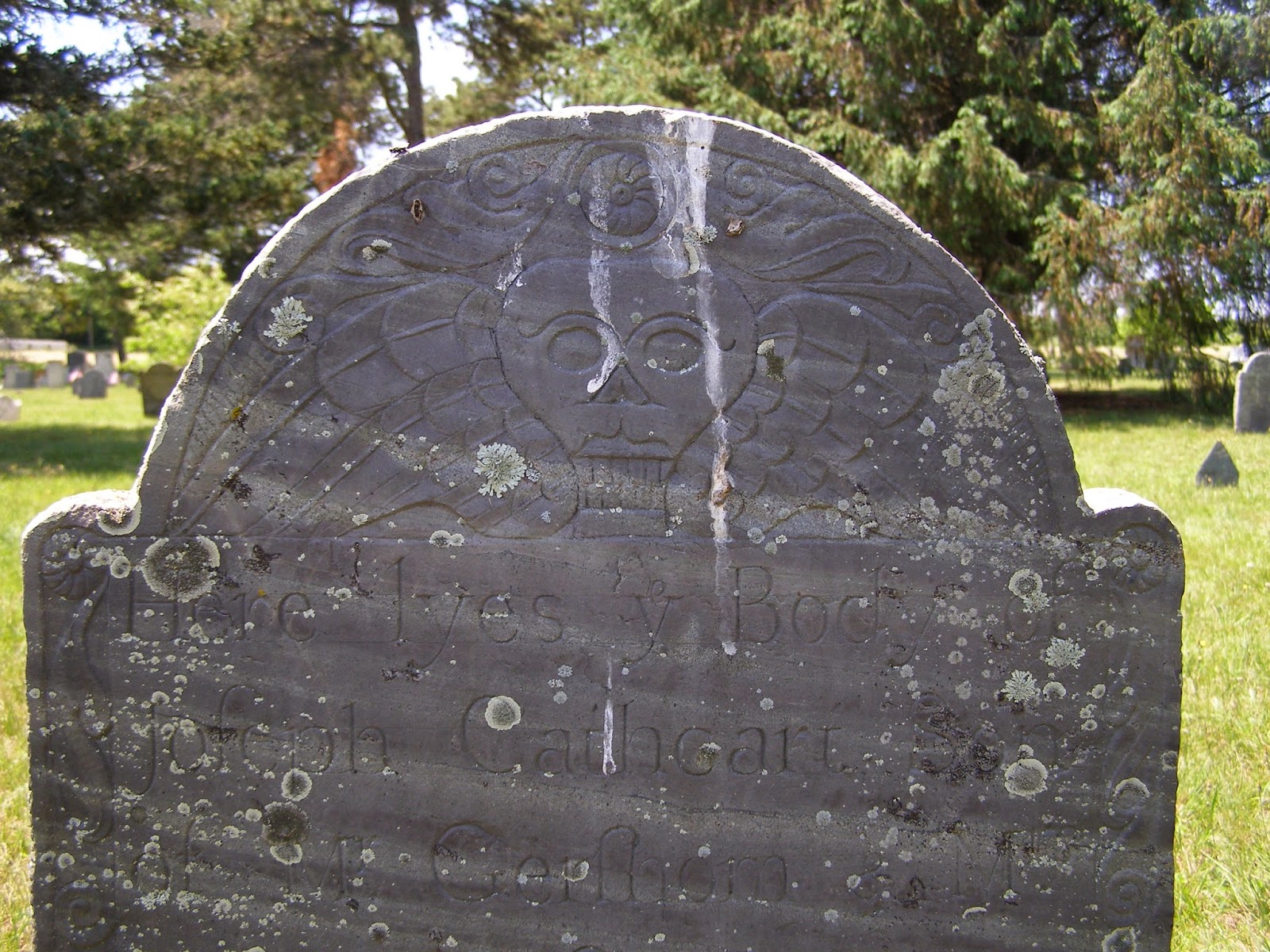 Among the earliest funerary symbols is the skull or death's head, usually winged, familiar to us from popular pirate lore, but actually a common symbol in post-Reformation Christian art, including elaborate works of the Baroque period which remind viewers of the passage of time, and the futility of fleshly pleasures and materials things - all the while demonstrating a great pleasure in the emotion and sensuality of art.  By the mid 18th-century, this more depressing image of the death's head was widely replaced with a more benign winged face, interpreted as that of an angel, or perhaps as an effigy of the soul of the deceased.   A few representative examples of this motif can e found in the Old Burial Ground of Falmouth, Massachusetts, and also in Brandon, Vermont. 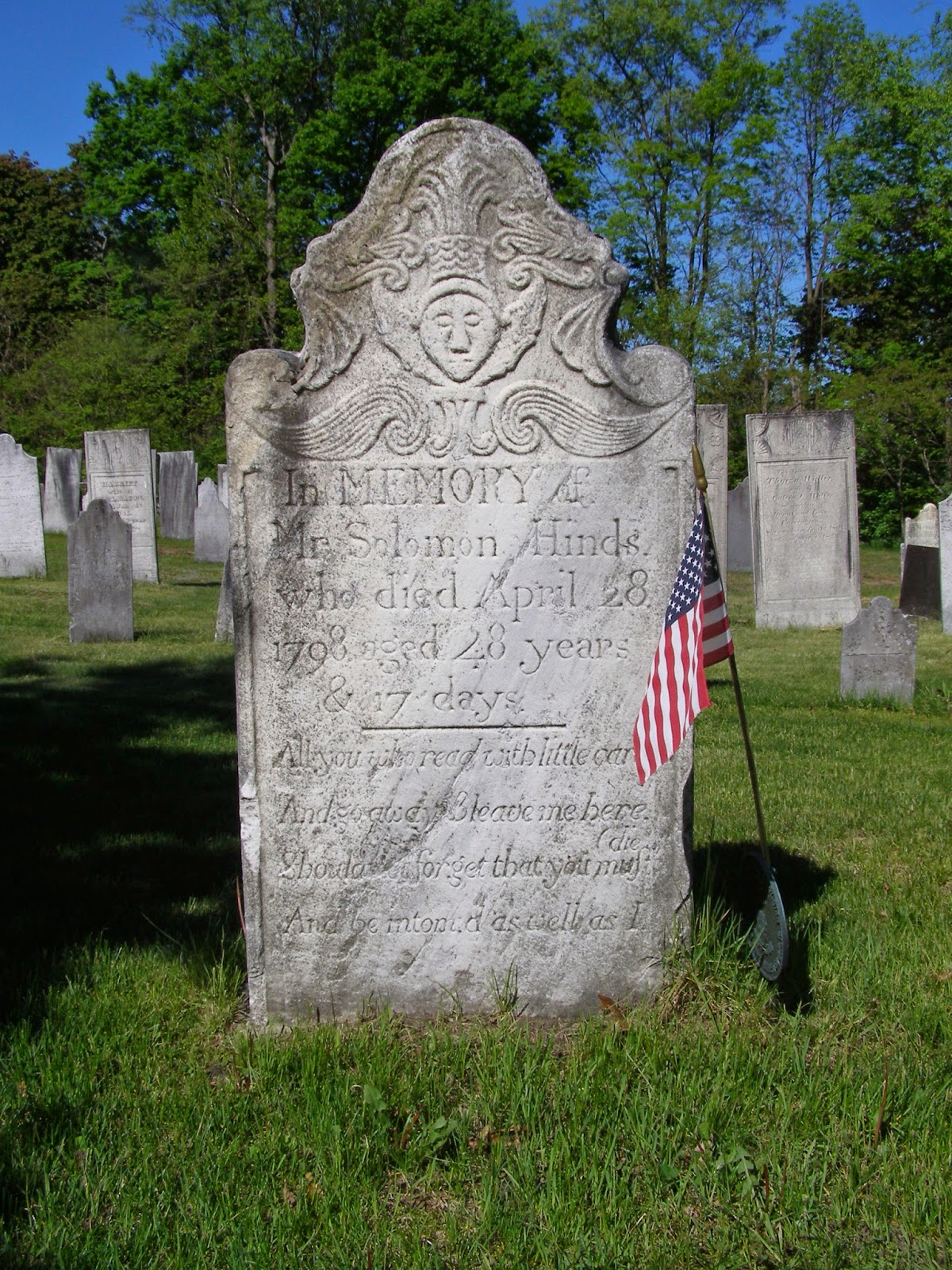 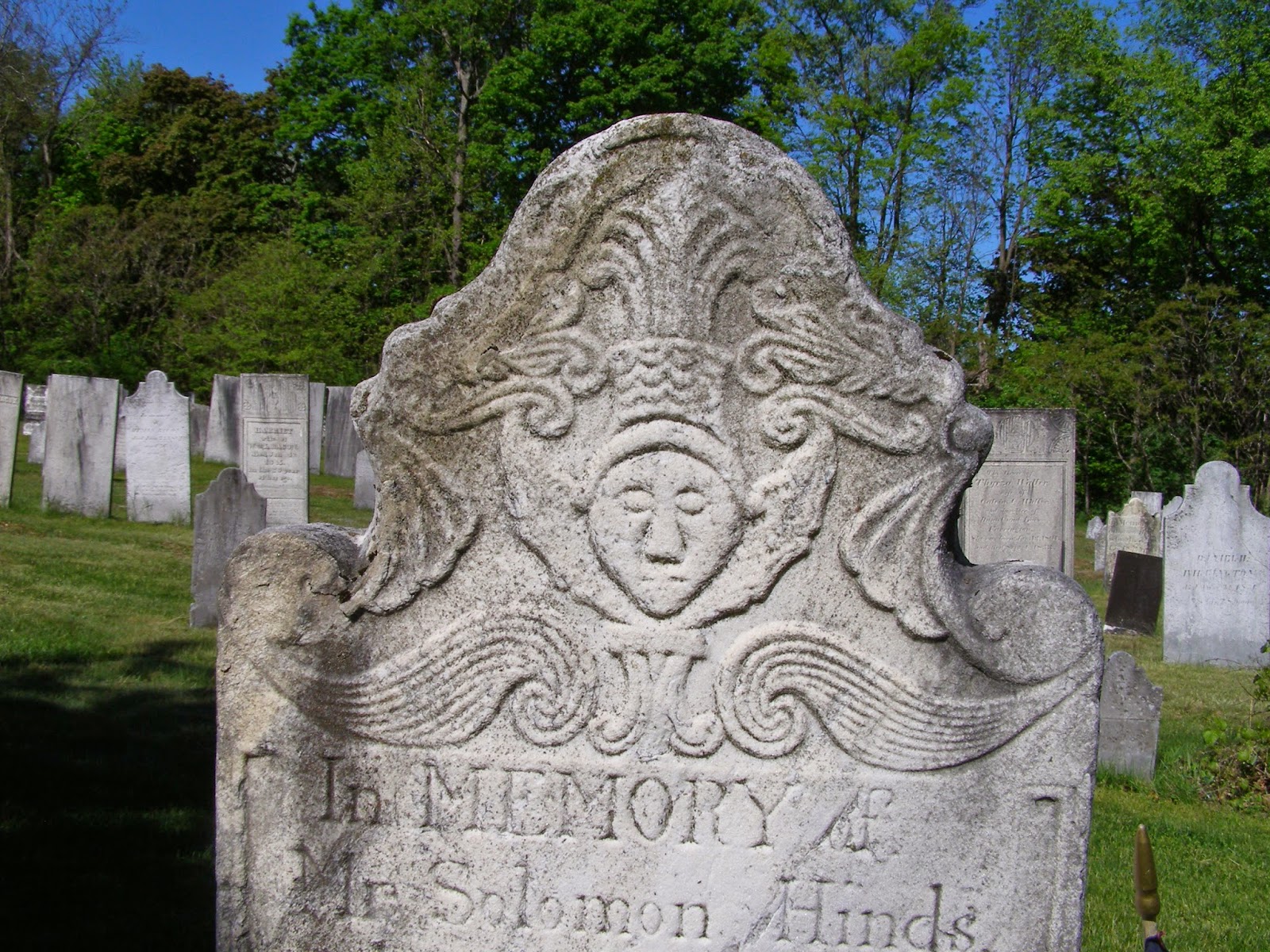 The Momento Mori aspect of the  funerary images are often emphasized by the inscriptions.  The Brandon gravestone of Solomon Hinds, who died at age 28 in 1798 admonishes us that:


All of you who read with little care
And go away and leave me here
should no forget that you must die
And be intomb.d (sic) as well as I 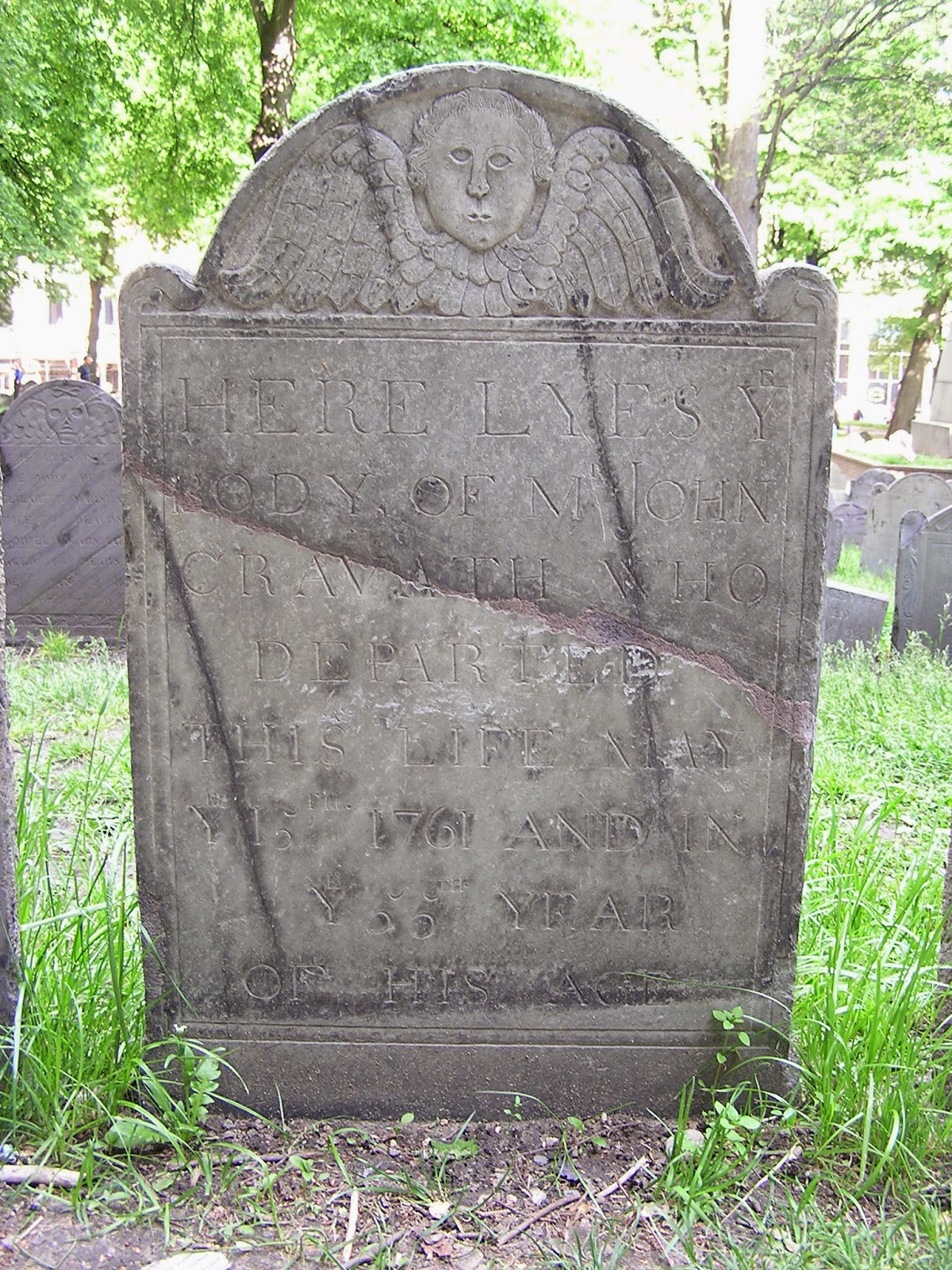 By the late 18th century, and through the mid-19th century, other more picturesque motifs are introduced, including the weeping willow and the urn.  These are found in abundance  at Falmouth, as well as the hand with a finger pointing heavenward.  A number of variations on the willow and urn themes co-exist and were seemingly carved by the same workshop, and even perhaps the same artist.  The symbolism of the willow is obvious - it is alive and it is weeping.  The urn's imagery is more complex since it derives from ancient art.  The urn was both the repository of the deceased's ashes, and when shown covered probably represents the grave or tomb.  But urns are also often shown alight, holding a flame, suggesting continued life after death, for the soul if not the body. 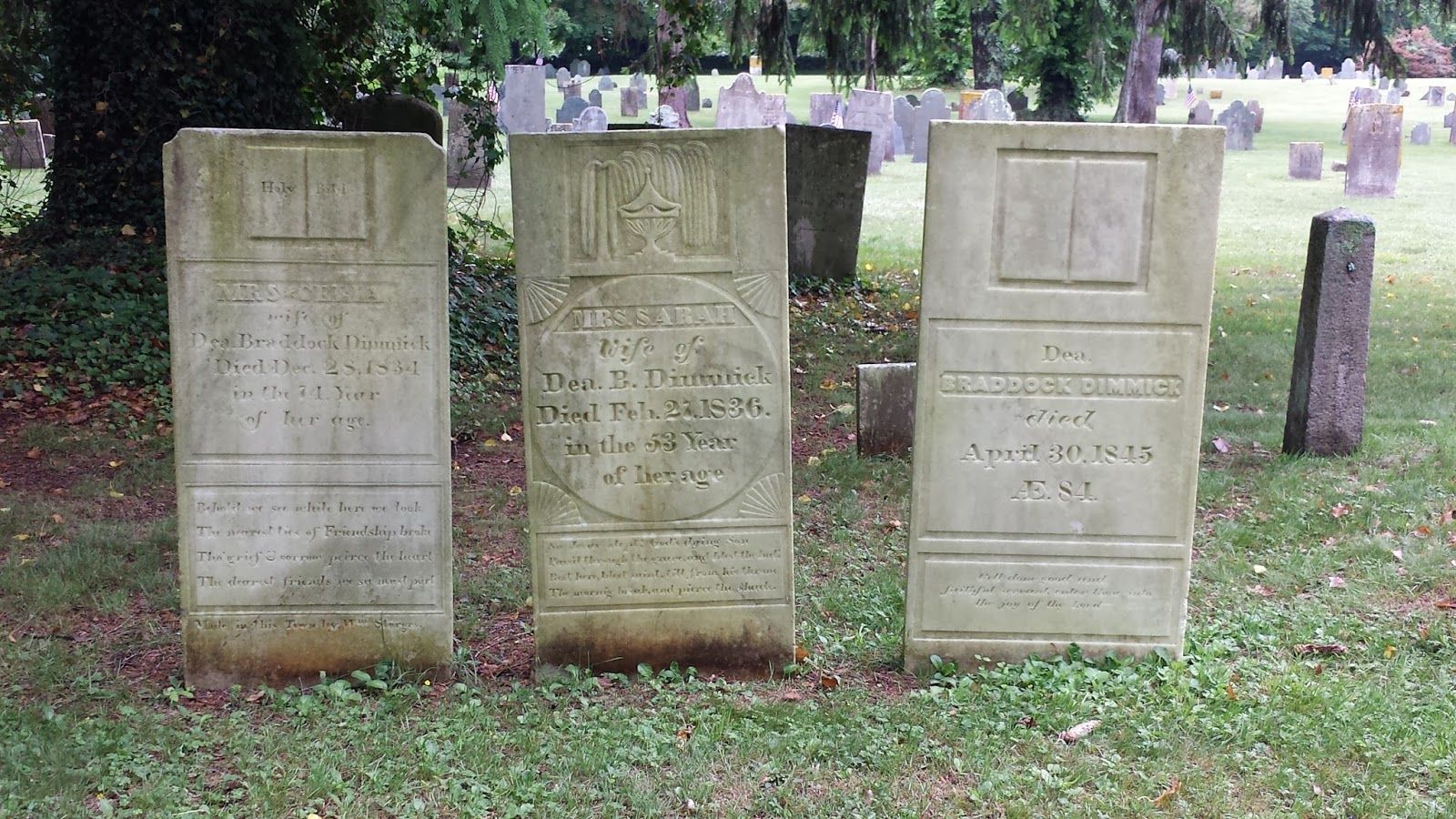 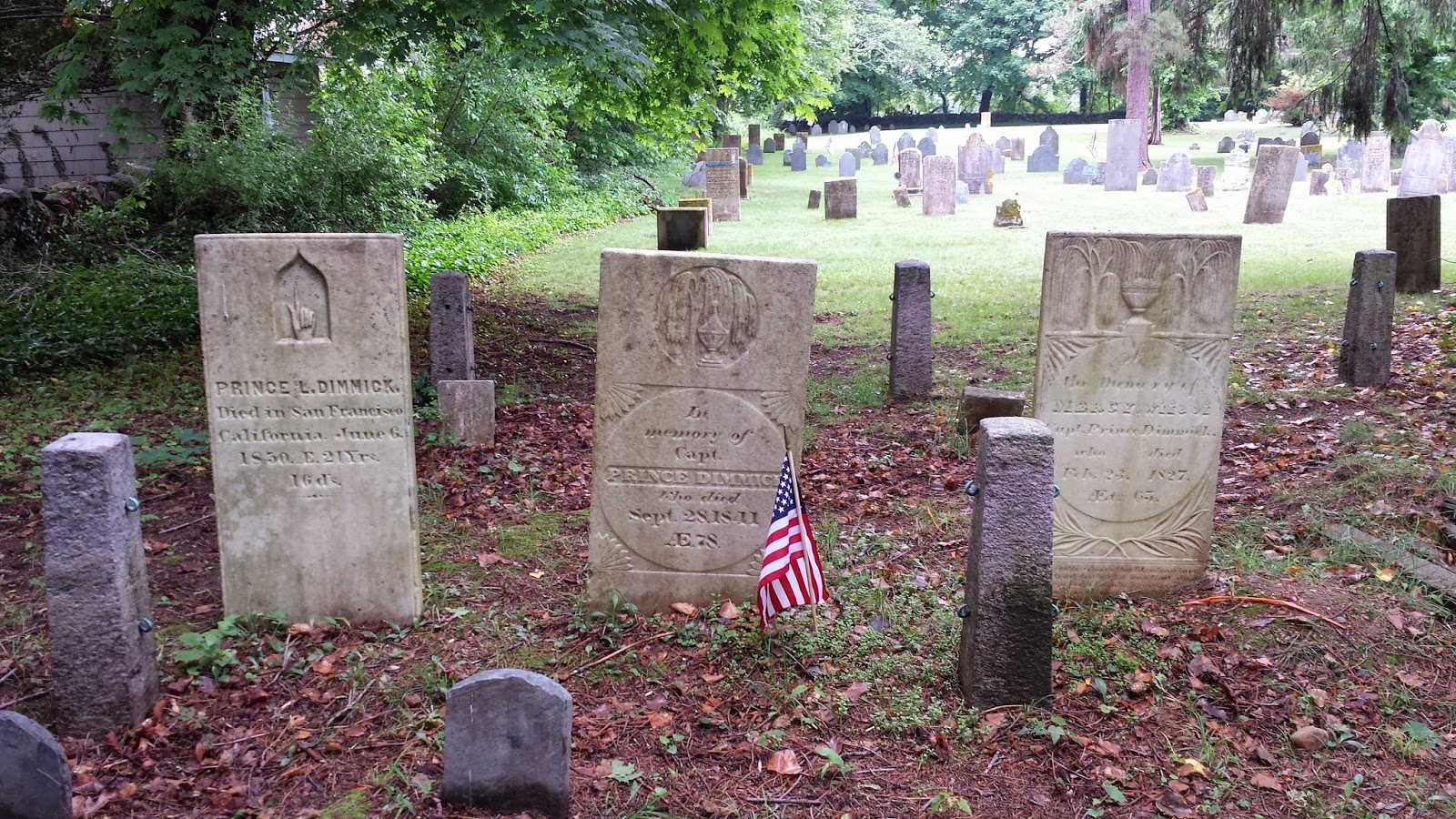 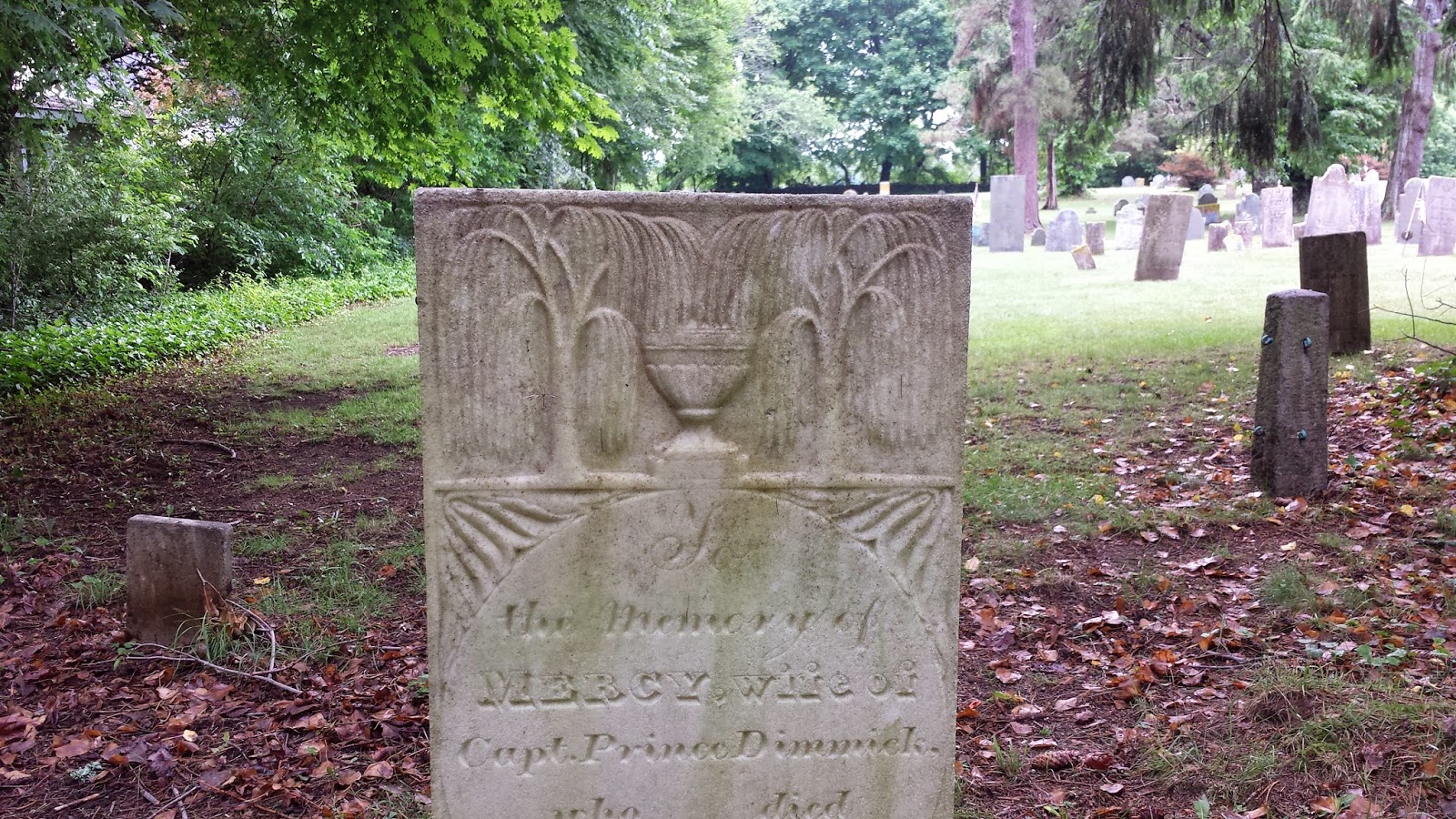 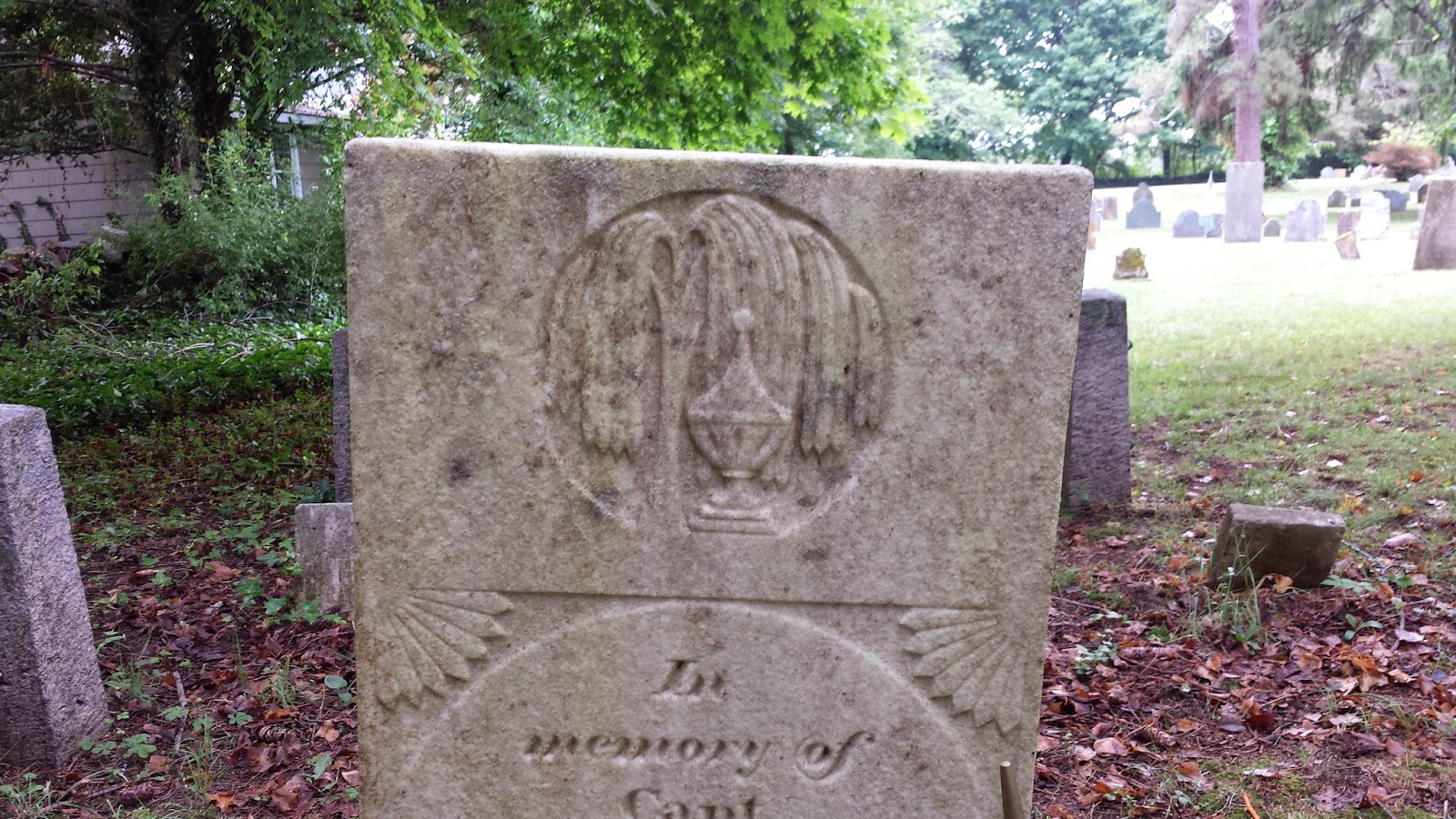 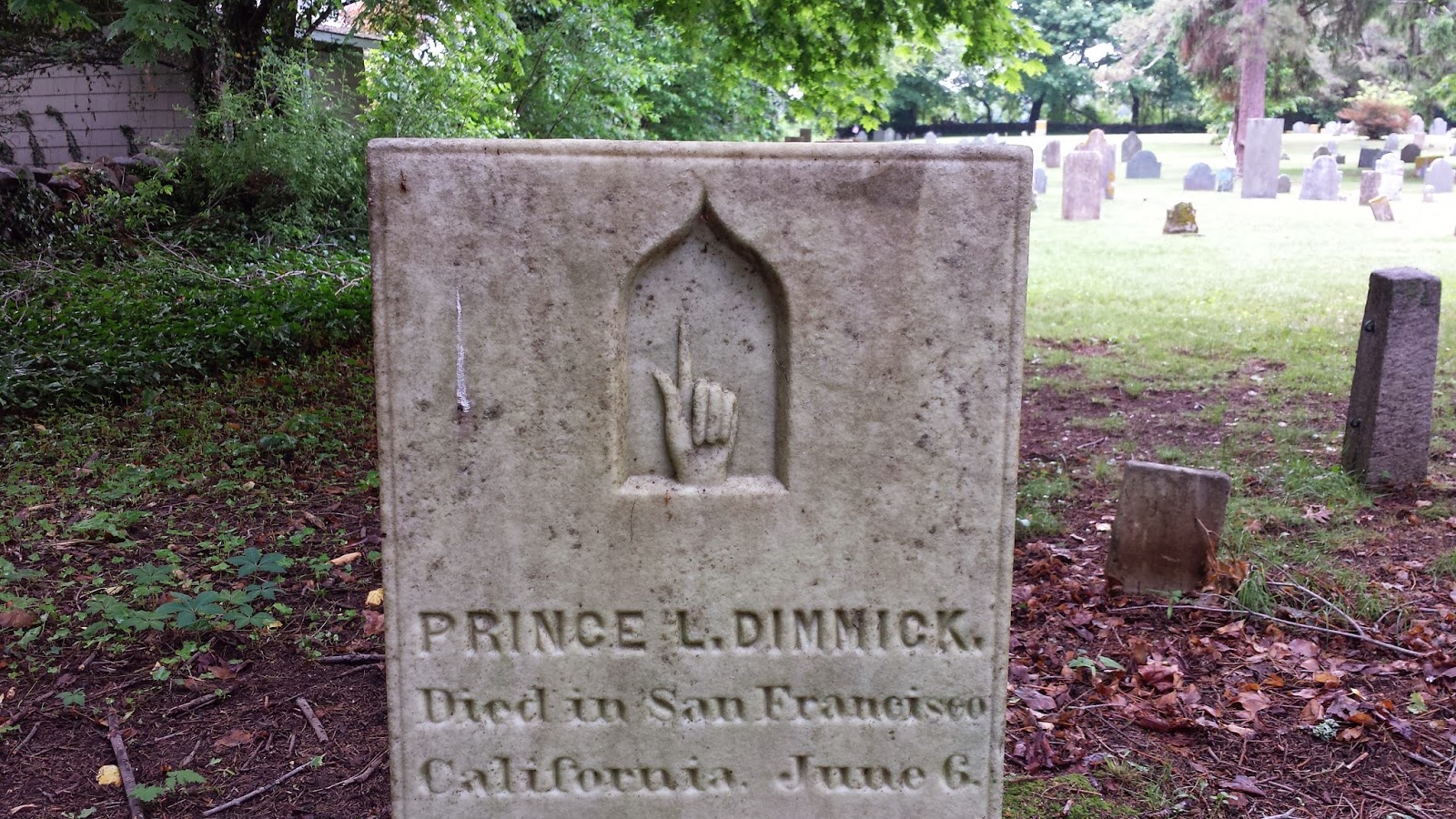 In Falmouth, the image of the hand with the finger pointing upward is occurs more and more by mid-century.  These look like the work of one artist - but they may represent a more positive or hopeful view of death.  the disembodied hand recalls a long tradition in religious art.  In Jewish art, and sometimes in Christian art, God or his representative is represented by an outstretched arm or hand - either open or pointing. 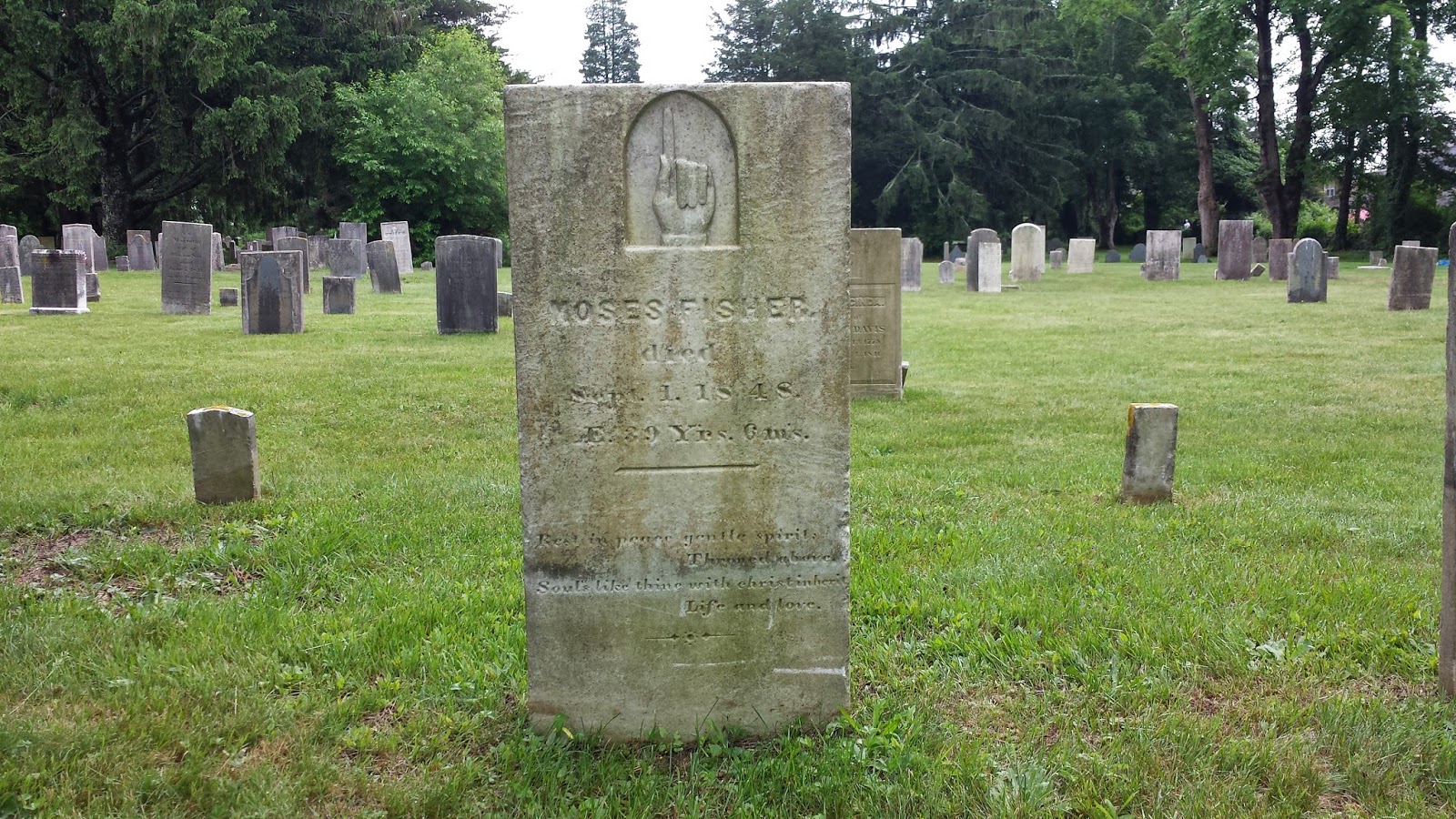 
These these hands in Falmouth have the clarity of modern day exit sign - pointing the way out and up.  Moses Fisher, who died in 1848 at age 39, is remembered with this optimistic couplet:

Rest in peace, gentle spirit / throne above /
Souls like thine with Christ inherit / life and love

Posted by Samuel Gruber at 4:48 AM No comments: 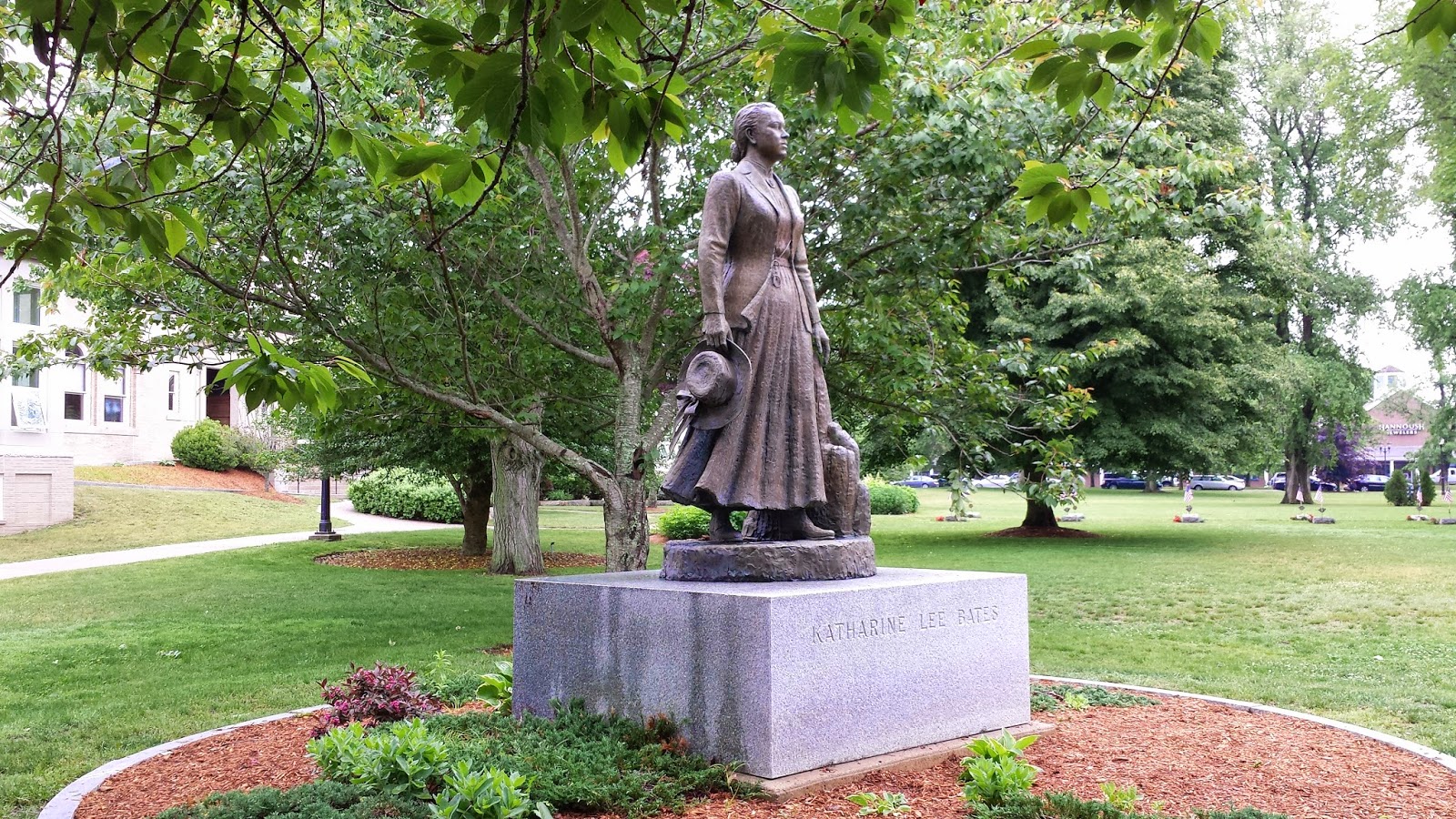 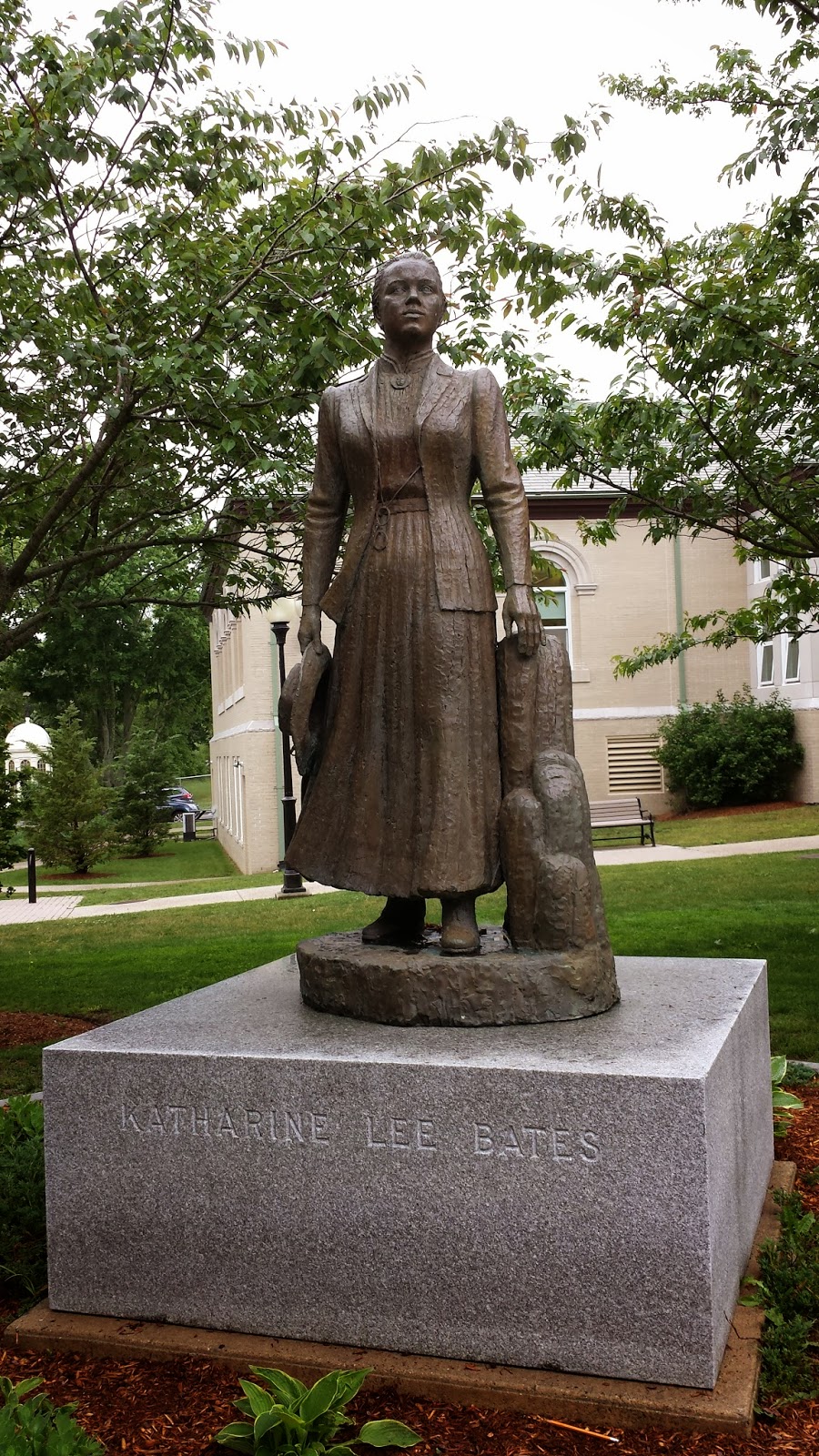 A favorite sub-category of public monuments previously mentioned is that of poet-philosopher-sage-scholar, exemplified by Andrew Dickson White's seated statue at Cornell.  A potential sub-sub-category is that of college professor.  How many of them (us) are commemorated in stone and bronze, and how and why?

Well, the Cape Cod town of Falmouth, Massachusetts makes a big deal out of Wellesley College English Professor Katherine Lee Bates (1859 – 1929), who was born here, had a hard early life, before eventually gaining success as a teacher and everlasting fame as author of the words to the anthem "America the Beautiful." The house where Bates was  born is an historic site, and there is a statue of her prominently placed in the public park in from of the Memorial Library on Main Street, a park that also serves to honor the town's military dead. 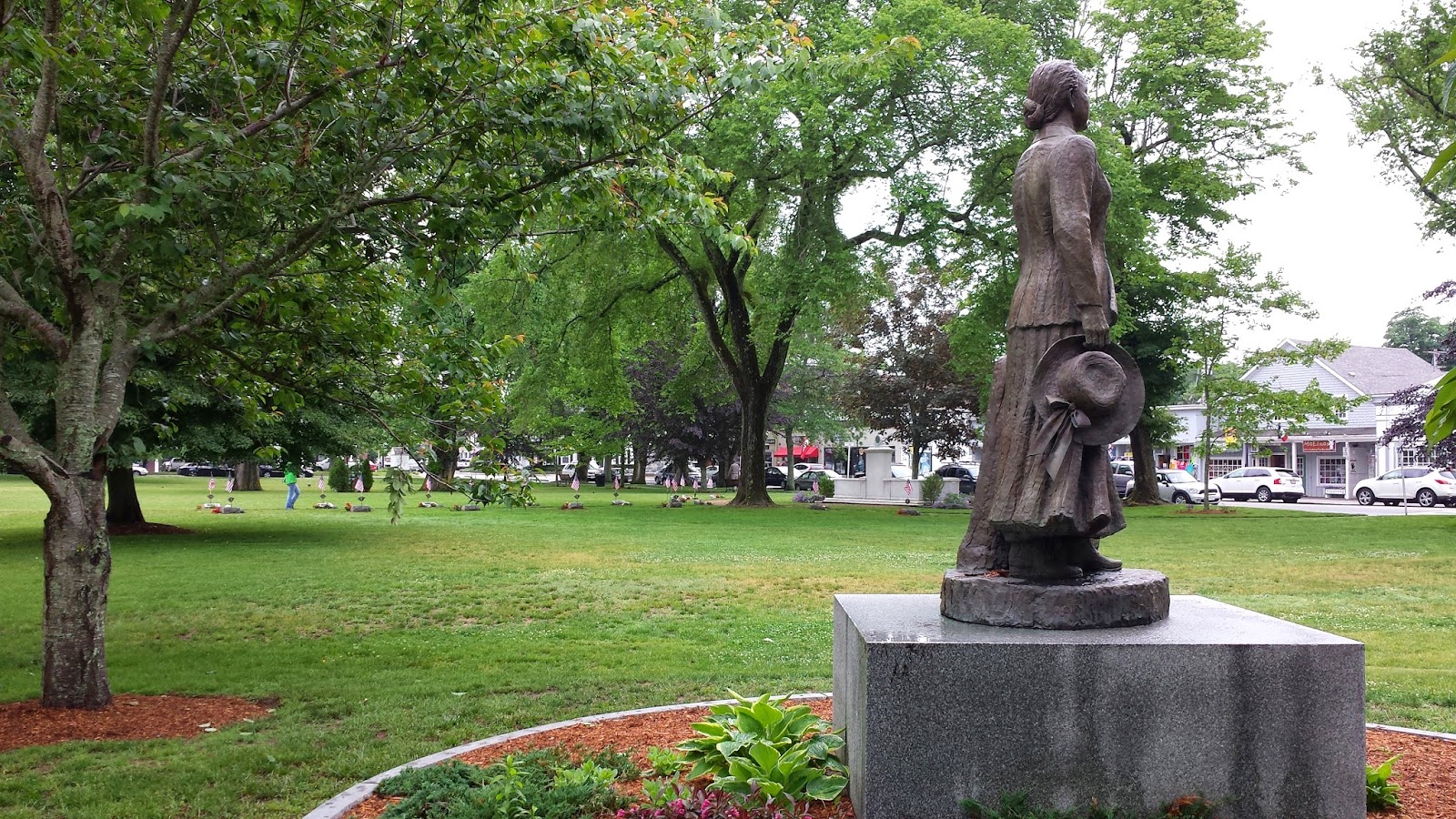 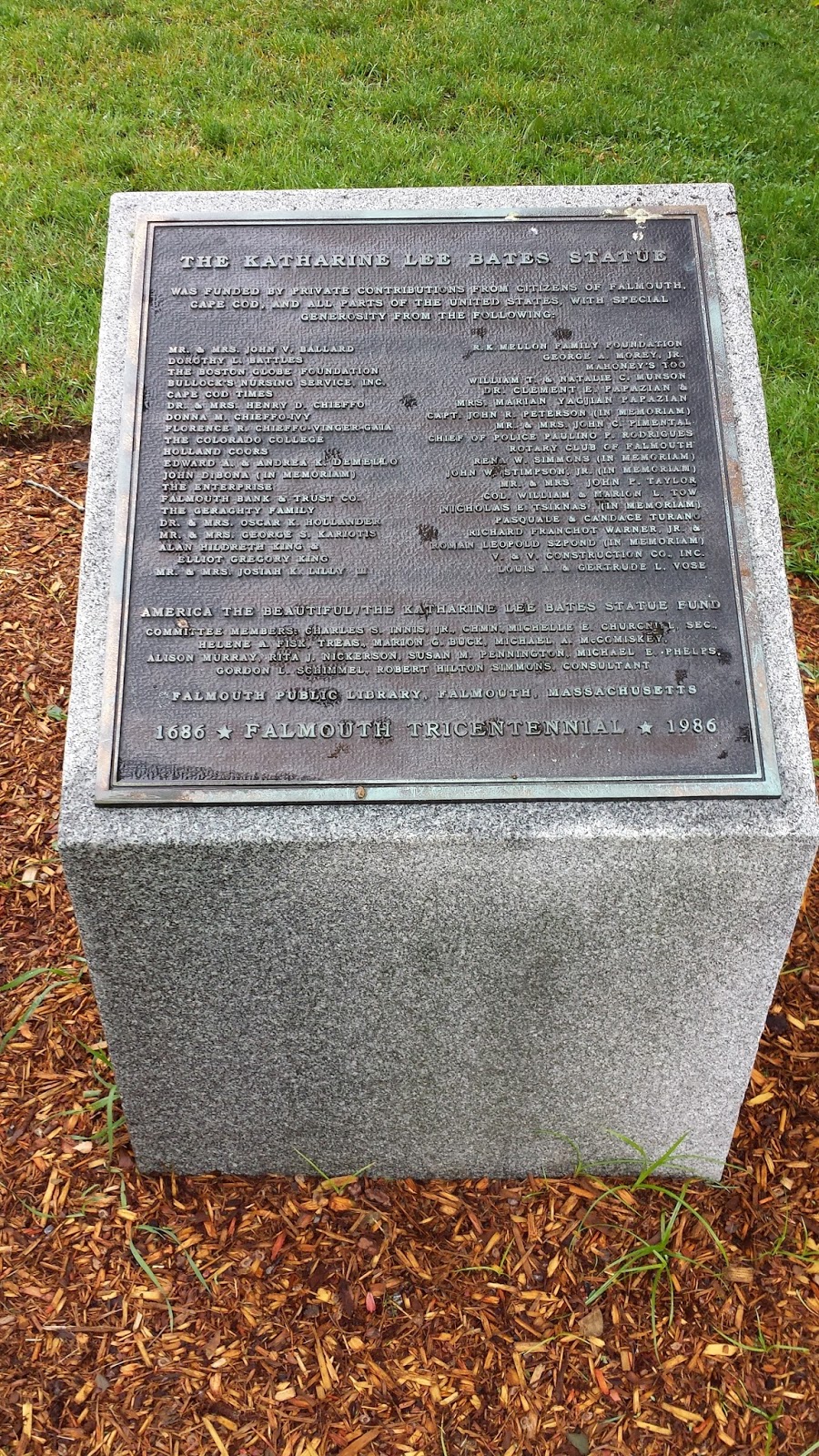 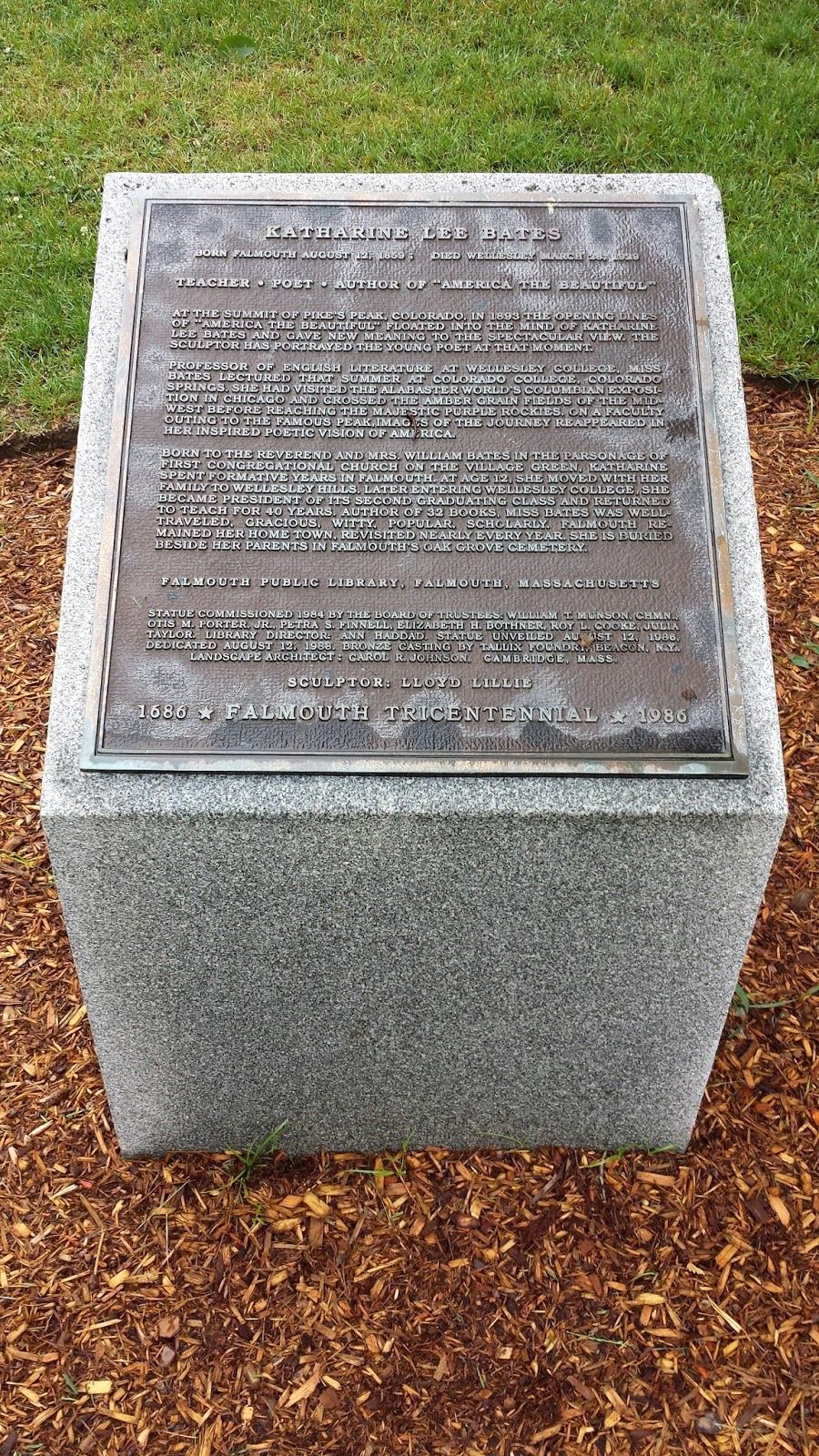 The life-size bronze statue by sculptor Lloyd Lillie, was inaugurated in 1986.   Bates is shown (if indeed she looked like this) as the inspired young poet, gazing from the summit of Pike's Peak in Colorado in 1893.  Bates originally wrote the words as a poem, Pikes Peak, first published in the July 4, 1895 issue of The Congregationalist, where it was titled America. Amended versions were published in 1904 and 1913.  Check out the original and amended versions.

The sculptor, like many before him, strives to give dramatic form to the life of the mind.

Bates's life in Falmouth was not an easy one.  She was the daughter of Congregational pastor William Bates and his wife, Cornelia Frances Lee.  Her father died the year after being named to Falmouth's First Congregational Church, shortly after Katherine's birth.  The "widow Bates" and her four children were impoverished and moved five times during the next twelve years before leaving Falmouth for good, moving to Wellesley Hills. 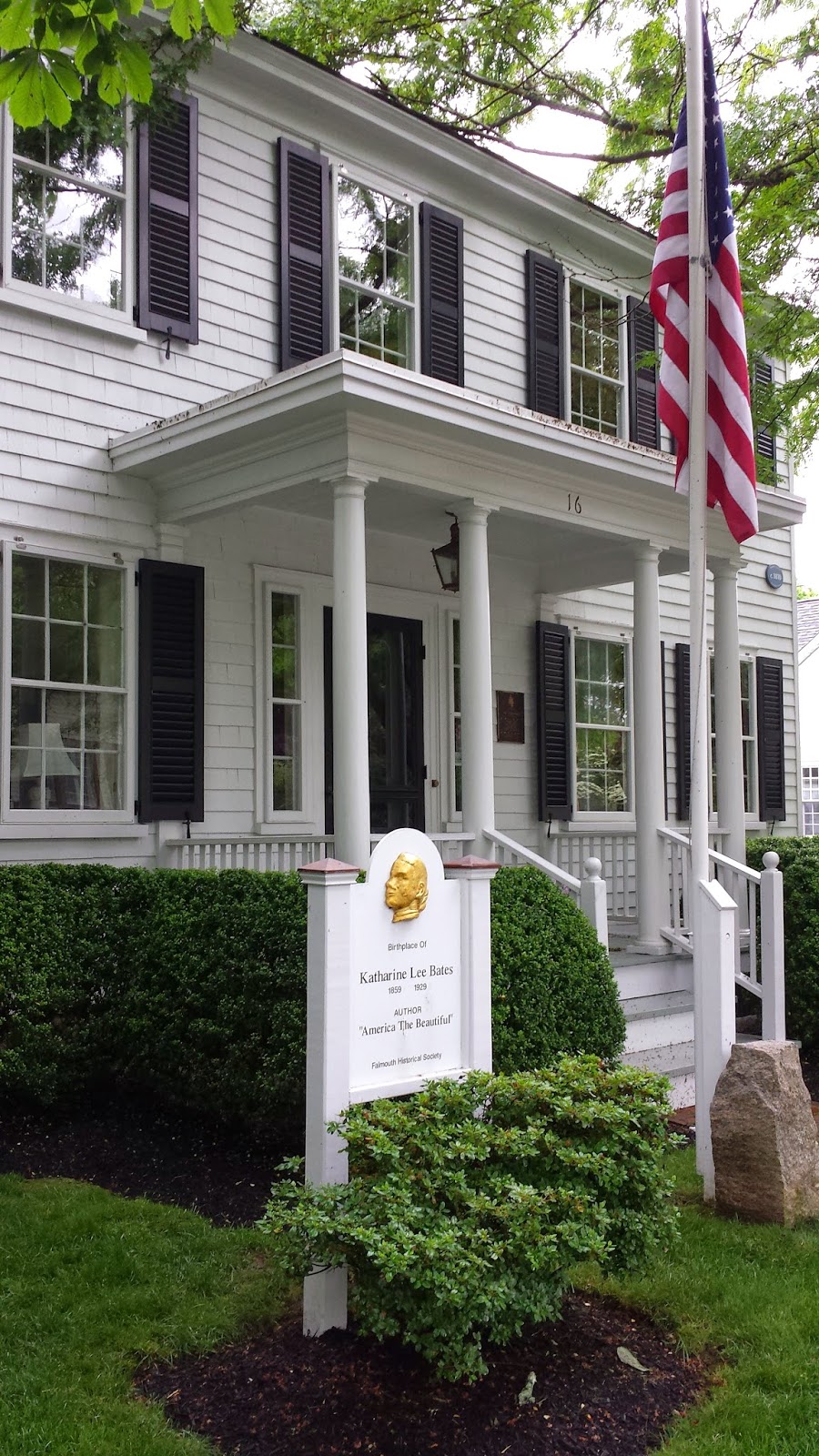 Bates graduated in Wellesley College's second class, and returned to teach there for 40 years. A college dormitory is named in her honor.  Unfortunately, its banal design is not nearly as inspired as her famous poem.  She found success as a writer and teacher in Wellesley, where she rose to the position of full professor, and as a prolific writer and editor, published more than 40 books of poetry, travel literature, and criticism (for a list of these see the well-presented Wikipedia entry)

In Falmouth, where Bates returned to visit every year, and where she is buried, plaques inside Falmouth's Memorial Library, and at the statue commemorate her authorship of "America the Beautiful," her best known work.  But neither plaque mentions her long (presumed lesbian) 'Boston marriage" relationship with Wellesley College historian and economic professor  Katharine Coman with whom she lived for 25 years, until Conan's death in 1915.

Today, this aspect of her personal life sometime outshines her professional accomplishments.  In 2012 Bates was named one of the 31 LGBT history "icons" by the organizers of LGBT History Month.  The women's relationship is explored by Judith Schwarz, in "Yellow Clover: Katharine Lee Bates and Katharine Coman," Frontiers: A Journal of Women's Studies, 4:1 (Spring 1979), 59–67.  I wonder how many American right-wingers know one of their favorite songs was penned by a lesbian.  But why not?  And don't forget the equally patriotic, but much less poetic "God Bless America" was written in 1918 by Irving Berlin - a Jewish immigrant.
Posted by Samuel Gruber at 8:54 AM 1 comment: