Mestrovic and Job in Paris and Syracuse 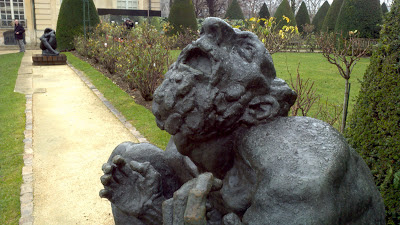 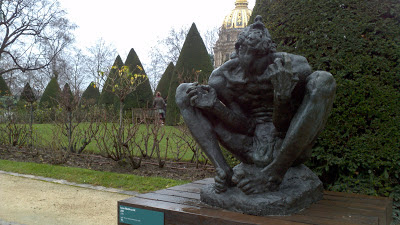 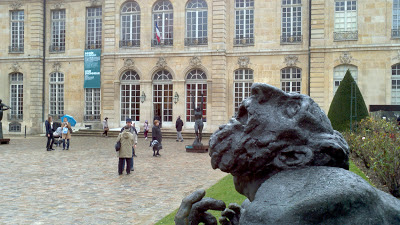 Paris, France. Job  by Ivan Mestoric (1945) on view at the Musee Rodin.  Supplicant Persephone (1945) can be seen standing in the court in the bottom image.  All photos: Samuel D. Gruber 2013

Mestrovic and Job in Paris and Syracuse
by Samuel D. Gruber

Visiting the Musee Rodin in  Paris a few weeks ago brought me face to face with an old friend - Ivan Mestrovic's agonized bronze statue of a crouching, suffering Job.  The work, completed in 1945 in Rome finalized a vision of Job that Mestrovic first conceived when in a fascist prison in Croatia in 1941.  Both Job and a companion piece of a Supplicant Persephone were exhibited at Mestrovic's one-man exhibit at New York's Metropolitan Museum of Art in 1947 (the first such show the Met had ever mounted for a living artist).  Today, the works face each other across a small courtyard at Syracuse University, where I pass them almost every day.  Both these works are presided over by a larger relief of Moses, a bronze made in 1990 from Mestrovic's plaster version designed for the un-built monument to the Six Million designed by architect Erich Mendelsohn, which was planned for Riverside Park in New York City but never built (more on that work in a future post).

Versions of Job and Persephone from the Ivan Meštrović Museums in Croatia were both installed in the Court of Honor at the Musee Rodin, as part of small but powerful exhibition of Mestrovic's work  coinciding with festival Croatie, la voici. 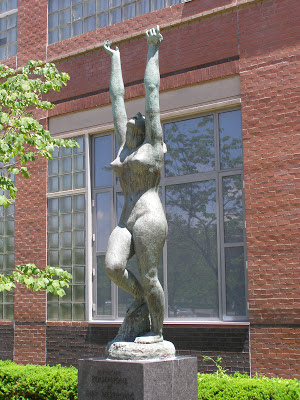 In Syracuse these works are among the very best figurative sculptures in a city that boasts an impressive collection of public bronzes. I teach these works in my Holocaust, Memory and the Visual Arts class.  In Paris, however, despite that fact that I was in the midst of exploring the city's commemorative landscape, these works took on - in the context of Rodin's work - a different, but related, meaning.  The anguish expressed by both figures was still powerful, but due to their museum siting it was dissipated.

On the other hand, since the works were in only a stone's throw from Rodin's great group of suffering figures, the Burghers of Calais (Les Bourgeois de Calais), and also of bronzes of all the constituent figures in the that work (the work has been cast twelve times in all, and can be seen in various configurations in different cities), the line from Rodin to Mestrovic was very clear.  The mix of defeat, anguish, anxiety in the posture and gestures of the Burghers of Calais figures, laid over expressions of nobility, made this an exceptional public monument when it was unveiled in 1889 and still today. As with Mestrovic's Job, Rodin's work has inspired any number of subsequent commemorative depictions of victims - especially Holocaust victims. 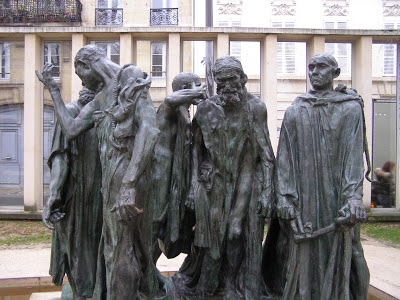 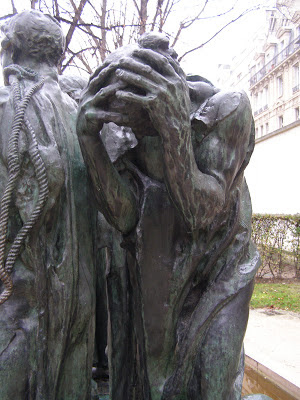 Both the preliminary designs for Job and Persephone express Mestrovic's personal anguish as a prisoner in 1941, when he expected death at the hand of Italian Fascists.  His political stances from the First Wold War period (in defiance of both Austria and Italy) and his refusal in the mid-1930s to accept a Nazi invitation to exhibit his work in Berlin, which Hitler himself would open, made him a persona non grata in occupied Yugoslavia.  Subsequently, these works as executed in bronze have been accepted as larger expressions of pain, remorse and despair in the wake of all the destitution in Europe brought about in World War II.   Mestrovic's first wife Ruza was Jewish and she died in Zagreb in 1942 and at least 30 members of her extended family also died in the Holocaust.  But Mestrovic knew many people - Jews and Christians - in artistic, political and others circles who suffered and died in the war.

Not surprisingly, Mestrovic was not the only artist of the time to use Job as a symbol of the suffering during the war.  Coincidentally, probably the best known painting of the theme, Francis Gruber's Job of 1944 from the Tate Galley in London, is also on view in Paris in the important - though rambling - exhibition L'Art en Guerre: France 1938-1947 on view at the Musée d’Art Moderne (through February 17, 2013).  Gruber (no relation to me) painted his Job for the Salon d'Automne (the so-called Salon of the Liberation) of 1944,  just after the Liberation of Paris.   Gruber's Job is a naked, forlorn and vulnerable man seated on a stool by a broken gate or fence.  According to the Tate online catalogue "Gruber painted this picture ... to symbolise the oppressed peoples who, like Job, had undergone a great ordeal of suffering. The inscription on the paper at which the figure is looking reads: 'Maintenant encore, ma plainte est une révolte, et pourtant ma main comprime mes soupirs'. This is taken from The Book of Job, 23.11"   This Job is essentially passive - there is none of the animal anguish Mestrovic brings to the subject.

It is significant that Gruber and Mestrovic both chose the figure of Job to channel their fears and faith about World War II and its aftermath.  For Jews and Christians alike, Job was the Biblical figure who embodied universalism.  Rabbis debated who he was, when he lived of if he was real at all.  Many saw him as the archetype Righteous Gentile, others a fictional device for teaching the love and fear of God.   Still, both Jews and Gentiles took him for their own, and his suffering represents the suffering (and hope) of all.  For Christian artists especially Job was an appropriate subject, that could linked to Jewish tradition (and contemporary suffering), but could also be interpreted in many other ways. 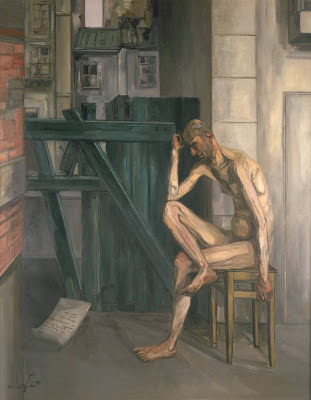 How did Job and Persephone get to Syracuse?  Mestrovic was born in Croatia in 1883 but by the 1920s he was very popular in the United States, where he had a successful exhibition at Brooklyn Museum in New York in 1924, which led to his commission for giant Indians (Bowman and Spearman) in Chicago,  installed in Grant Park in 1928.  In 1947 Syracuse University Chancellor William P. Tolley arranged for Mestrovic to come and teach at Syracuse University, where he stayed until 1955 before moving on to Notre Dame, where he taught until his death in 1962.  He brought many of his recent and in progress works to Syracuse, where he worked on them, and trained a generation of young sculptors. You can read about Mestrovic at Syracuse here, and in a longer article by David Tatum here.  Notre Dame hold a large collection of Mestrovic papers, the finding aid is here. 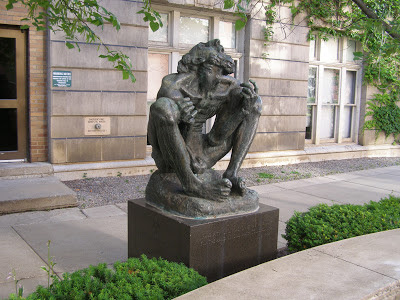 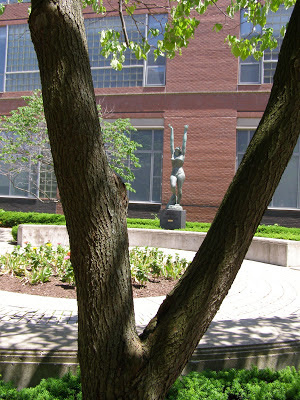 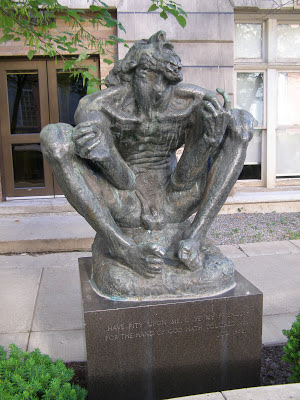 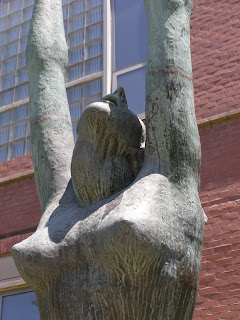 Posted by Samuel Gruber at 2:15 PM