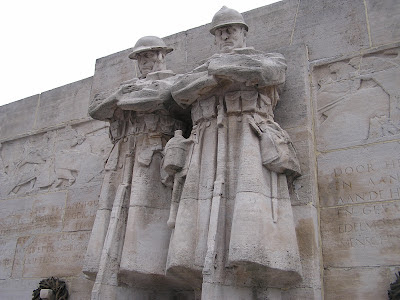 Europe is covered with war monuments like a measles patient has spots.  You can find them in every village and town, in every country.  Big cities have big monuments, and small ones tucked away in small parks and on street corners.  These vary tremendously in their effect as vessels of memory, as works of at and as urban decoration and the backdrop for public ceremony.

I am partial to the monuments of World War I.  It was a big war with terrible consequences, and many of the memorials are big monuments with bold forms in striking postures - though few if any were allowed to depict scenes of suffering and death.  A good example of this is the Anglo-Belgian War Memorial in Brussels, Belgium, commissioned by the British Imperial War Graves Commission and designed by the British sculptor Charles Sargeant Jagger (1885–1934).  In Belgium it is known as the Brits Oorlogsmonument in Dutch and the Monument Britannique in French.  It is built as a wide wall-like cenotaph. 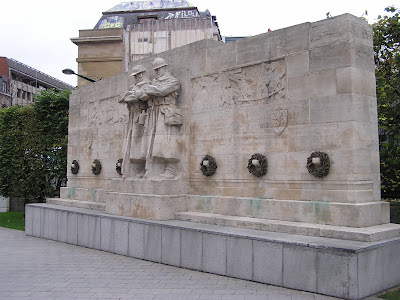 Unlike many monuments, it does not commemorate a heroic battle, but rather the support given by the Belgian people to British prisoners of war.  The tall central figures in high relief represent a British and a Belgian soldier.  On wither side are low reliefs depicting wounded British soldiers aided by Belgian peasants.  It was unveiled by the Prince of Wales in 1923.  The monument is carved from Brainvilliers stone.  Casts of the reliefs are at the Imperial War Museum, London.  A plaster cast of the Belgian soldier is held in the Army Museum in Brussels.

Strength and nobility of purpose were the overriding themes of World War I monuments  - as if the posture of these monuments could make the population forget the immeasurable and often pointless suffering and destruction of the war.  For those memories one needs to turn to post-war literature and art. Still, the bold and sometimes heavy-handed imagery of these monuments endured, and Jagger's sculptures for the Brussels monument foreshadows the public sculptural style favored by the 1930s by powerful image-conscious states - whether Fascist Italy, Nazi Germany, Communist Russia or the democratic but capitalist United States. 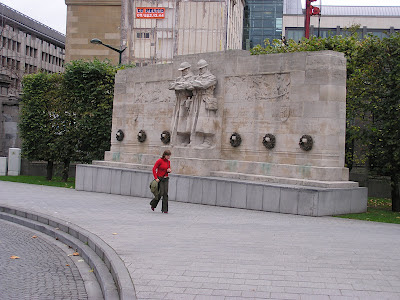 This type of war monument is very different in form and purpose to many earlier war memorials - such as those American Civil War monuments in Detroit, Michigan (1872) and Troy, New York (1891) I have written about, and the contemporary and nearby Infantry Soldiers Monument in Brussels at place Poelaert (1935), that served as central organizing points in the urban plan, punctuating an important intersection, and often serving as a visual focal point for long street vistas. Such monuments often include tall columns or obelisks.

This Brussels monument is a wall to be passed by, but become animated when it serves as the backdrop to commemorative ceremonies.  When used like the scaenae frons of a theater, in front of which the appropriate - but varied activities take place, memory can be triggered, reformulated and invigorated.  Or, it may more resemble in purpose a temple front - before which the same activity takes place year after year following a remembered but formulaic liturgy, important to those who have first-hand experience of the event commemorated, but entirely foreign to all others.  For all such monuments deciding how they will be used determines how they will be understood.

The resemblance to a giant gravestone encourages the placement of wreaths and flowers upon the projecting ledge at the base. There are many examples of this type of monument.  One of the best known is the Warsaw Ghetto Uprising Monument, dedicated in 1948.

Posted by Samuel Gruber at 6:51 AM